Attorney General and Minister of Legal Affairs, Basil Williams, a Senior Counsel himself read the petitions and recounted the life and work of the individuals before a packed courtroom of family, friends, lawyers, former judges, magistrates and other well-wishers.

Chief Justice Roxane George, Chancellor of the Judiciary, Yonette Cummings-Edwards and Speaker of the National Assembly, Dr. Barton Scotland were also at the sitting. 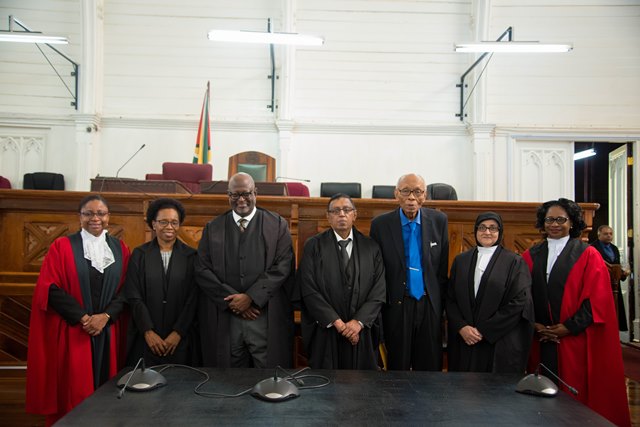 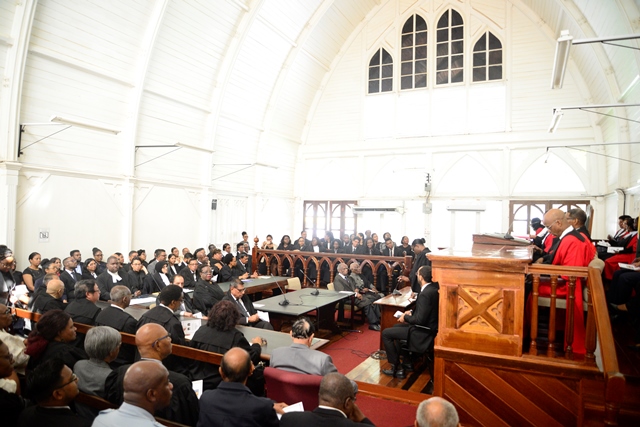 Inside the court at the special sitting of the Supreme Court of Judicature. 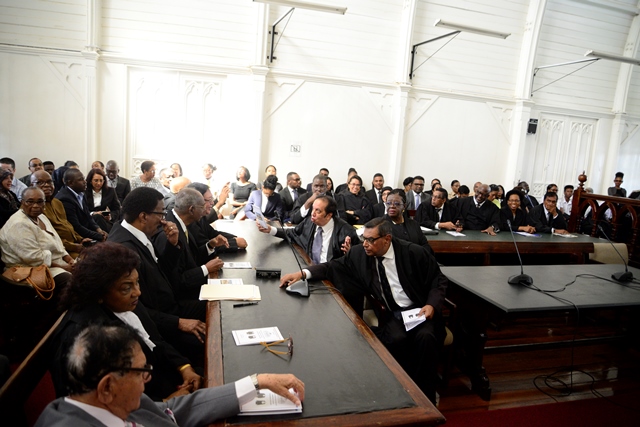 Attorney General and Minister of Legal Affairs, Basil Williams S.C, among those gathered inside the court for the special sitting of the Supreme Court of Judicature.

The Attorney General told the court that Robert Ramcharran has forty years’ experience in the law profession. Ramcharran, who hails from the Wakenaam Island in the Essequibo, worked as a primary school teacher and later joined the public service working as a clerk at the Magistrates’ Court. He gained admission into the University of Guyana as a mature student to pursue studies in the Law Programme in 1994. He then went on to study at the University of the West Indies and subsequently obtained a Legal Education certificate from the Council of Legal Education, Hugh Wooding Law School and was called to the Bar later that year. Ramcharran practised in corporate and a number of areas of civil law with a considerable amount of success; then in 1982, he served as a magistrate.

Speaking on Ali-Hack, AG Williams said she has broken the glass ceiling by championing the cause relating not only to law, but to women and gender equality and religion, as the first woman to dress with the hijab in court, since 1995. Ali-Hack was confirmed as the substantive Director of Public Prosecutions (DPP) by the Judicial Service Commission in 2008. She had been acting in the capacity since 2004, after Chief Justice Roxane George vacated the post and took up the appointment as a High Court judge. Today, she is the first female Muslim attorney to be appointed Senior Counsel.

James-Boston, who studied at the University of the West Indies and Hugh Wooding Law School has more than 33 years of experience practising law. She is one of the founding members of the Guyana Association of Women Lawyers (GAWL), founded in 1987 with the primary aim of giving legal advice and assistance to women in society.

Fraser, who is a graduate of the University of Guyana and the University of the West Indies, has a wealth of knowledge and experience and is a managing partner in the Fraser, Housty and Yearwood Law Firm. He has been practising for a number of years and specialises in civil and commercial law.

According to the Attorney General, Poonai has decades of practising experience. He was elected as a committee member of the Guyana Bar Association in 2017.

The newly-appointed Senior Counsel, in response to their acceptance to the Inner Bar, acknowledged their families, friends and loved ones, as well as President David Granger. Ali-Hack commended the new and humane approach to justice and promised to continue to support the same. The Drug Treatment Court which will soon come on stream is a testimony to that approach, she said.

According to the Chief Justice, the status ‘Senior Counsel’ is recognised by the courts and they have the privilege of sitting within the bar of the court. They wear gowns of a similar design to that of a judge and are usually referred to as ‘silks’ and are given precedence when dealing with matters when called.

The Chief Justice urged the ‘silks’ to continue to be advocates not only in court but various public spheres, “as we seek to improve the administration of justice and the court system as a whole”.

President of the Bar Association, Teni Housty said the ceremony is a confirmation that there is a professional resignation of persons within the law profession. “The conferment to silk comes with it, duty,” he told the astute body of lawyers.