For the first time, NDIA will undertake work in Region Nine

The National Drainage and Irrigation Authority (NDIA) is set to embark on improving drainage and irrigation systems. To this end, the agency will, for the first time, build rainwater harvesting facilities in Region Nine as more focus is being placed on agricultural development in the Upper Takutu-Upper Essequibo Region.

Better drainage and irrigation is a pre-requisite to improved agricultural production. As measures are aimed at developing a more diversified and climate-resilient agricultural sector, a number of villages have been earmarked for the building of these rainwater harvesting facilities. 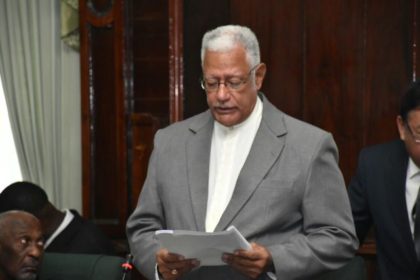 These facilities will see increased water supply for livestock and crops while the possibility of flood risk is expected to be reduced. Residents in this region are usually affected by limited water supply during dry periods while at other times, severe flooding during intense rainy seasons stymie growth and development of agriculture.

Minister of Agriculture, Noel Holder recently explained that, “for the first time, NDIA will be undertaking works in Region Nine. The North and South Rupununi villages have traditionally suffered from inadequate water supply for their crops and livestock during dry months of the year. This has severely affected their livelihood. To this end, we will be improving or building rainwater harvesting facilities in these communities, commencing in the North. Works are planned for the villages of Wowetta, Rupertee, Annai, Aranaputa, Massara, Toka, Parishara and Nappi.”

These works, as pointed out by Minister Holder, are expected to commence in 2017. He also explained that in order for new and improved systems implemented by the NDIA to be effective, proper management at technical and managerial levels is required.

The NDIA is also expected to commence mapping of agricultural facilities and drainage and irrigation channels in each administrative region. “These maps will show their location and other pertinent data. It would indicate which works are executed by Water Users Associations, Community Development Councils, Farmers’ groups, Neighbourhood Democratic Councils, etc. and would be a major asset in depicting the D&I systems throughout Guyana,” Minister Holder explained.

Meanwhile, the ministry is working towards reducing flooding on the coastland. With these plans factored into the Agriculture Ministry’s 2017 agenda, the NDIA is expected to be more proactive with the introduction of a dredger for clearing outfall channels.

Recommendations in the draft of the final report for the modelling of an effective and efficient drainage system for the city of Georgetown was submitted by a team of Dutch Engineering students. This report will be used as a guide to ensure the flooding situation in Georgetown is corrected.

Minister Holder pointed out that, “taking due cognisance of the effects of global warming on rainfall patterns and sea level rise, we recognise that our systems must be improved. The objective of executing capital works in the medium-term would, therefore, be to improve drainage and irrigation throughout Guyana, which would contribute to the long-term goal of achieving a high capacity D&I (drainage and irrigation) system that actively contributes to improved agricultural productivity and reduced incidence of flooding.”