Former Minister of Energy and Energy Affairs, Trinidad and Tobago, Kevin Ramnarine believes that having a blank slate to develop an oil and gas industry is not such a bad thing. He however said, that 2017 through 2020 are crucial years in which Guyana has “to get it right.” 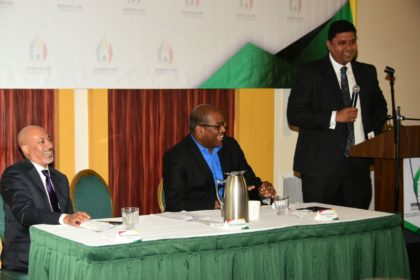 Former Minister of Energy and Energy Affairs, Trinidad and Tobago Kevin Ramnarine (at podium) interacting with the audience as Directors of GOGA Suresh Beharry and Nigel Hughes looks on

Ramnarine, recommend that Guyana should follow the tailor’s rule: “measure twice, cut once” as the framework for the establishment and maintenance of its oil and gas sector.

Ramnarine delivered a public lecture on Oil and Gas Thursday evening at the Pegasus Hotel, Georgetown

“You have one chance to get this right and the good news is that there are a lot of countries around the world that can serve as examples,” Ramnarine told the gathering.

Ramnarine noted that what obtained in Trinidad will not necessarily obtain in Guyana since Guyana is starting out as a deep water oil producing state whereas Trinidad’s oil industry is more visible.

“Nonetheless, it is important that a flagship national oil and gas company be created,” the former minister said. He cautioned that the state owned oil and Gas Company should be insulated from political interference.

The reality is that we’ve (Trinidad and Tobago) done some things right. We’ve invested in infrastructure, healthcare and education. But, it’s accepted in Trinidad…that there was a lot of wastage and inefficiency on how different governments expended the oil and gas rents,” Ramnarine pointed out.

The former minister also recommended that Guyana sticks with a production sharing model since it gives the government more control over the industry, gives the government cash and gives the operator more stability, “A properly designed PSC regime can also protect the country in times of low oil and gas prices,” Ramnarine said.

The former Energy Minister recommended separating the regulation of the sector from the business developer to prevent conflict of interest. “I recommend that the role of regulator be separate and independent from the role of business development,” Ramnarine said.  “However, a strong regulatory framework is still needed to oversee the industry but the framework should facilitate and not frustrate investors,” Ramnarine added.

Ramnarine served as Minister in Trinidad and Tobago from June 2011 to September 2015. The former minister is credited with opening up 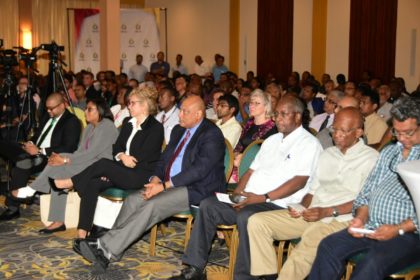 the twin island state for deep water exploration and overseeing the first energy related initial public offering (IPO) which became the largest IPO in Trinidad’s history among other achievements.

In the development of the sector, Ramnarine encouraged Guyana to use oil revenues to invest in other skills since oil and gas is capital intensive and will not employ many persons.  There is also potential for growth in the service sectors but Ramnarine advised that this could be at the risk of other sectors.

The former minister recommended sterilising energy rents away from the wider economy. “A portion of the oil rent should be spent on healthcare, education and infrastructure,” Ramnarine said. Additionally, investing in downstream industries is essential if the general public is to benefit from oil and gas revenues, Ramnarine noted.

He also recommended that Guyana create companies that will continue beyond the oil and gas industry. This is where a strong and effective local content policy comes into effect, Ramnarine said. He cautioned that the policy “should not compromise the competitiveness of the companies that are investing in Guyana.”

The lecture was the first in a series sponsored the Guyana Oil and Gas Association (GOGA).  The public awareness campaign by GOGA is part of the Association’s mandate to promote and advance the responsible development of the oil and gas economy.