Ministry of Foreign Affairs, May 31, 2017 – Seventy-seven public servants are currently benefitting from the fourth edition of Spanish language courses held under a cultural agreement signed by the Ministry of Foreign Affairs and the Government of the Republic of Colombia since 1970. The classes are scheduled to end in August. Participants will receive a certificate from the National University of Colombia at the conclusion of the course.

National Ozone Officer with the Ministry of Agriculture Behonka Dey said, “It’s a bit challenging, especially the vocabulary although I like that the class is continuous.” She noted that she often encounters Spanish while at work and “even though I might not be fluent, I still need to understand what is being said.”

Another participant, Foreign Service Officer Robin Motayne with the Ministry of Foreign Affairs, explained that the course was interactive with a very engaging lecturer. “Very little English is spoken in the class, which is good, because a foreign officer should be versed in a language; at least one or two,” Motayne continued.

The four-month course is being conducted by Professor Nelson Hernan Giraldo who has taught at several universities and academic institutions. 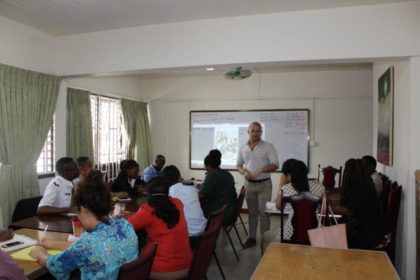 Professor Nelson Hernan Giraldo of the National University of Colombia engages public servants during a lesson.