Georgetown, Guyana – (October 17, 2018) Pursuant to the terms of the agreement on technical cooperation between the Government of the Co-operative Republic of Guyana and the Federative Republic of Brazil, the drilling of the fourth well in Awaruwaunau Village, South Rupununi, Upper Takutu – Upper Essequibo (Region Nine) commenced yesterday.  This follows closely on the heels of similar exercises in Aishalton, Chukrikednau and Karaudanawa.  So far, water was found in all of the areas drilled.

Upon completion, this initiative, which is being executed by the Brazilian Army’s Sixth Battalion Engineering Corps (BEC), will see eight artesian wells being drilled in eight communities. 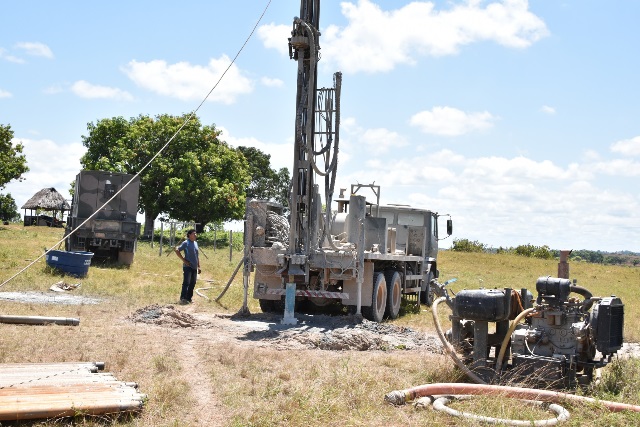 The Brazilian Army preparing to drill the fourth well in Awaruwaunau Village yesterday. 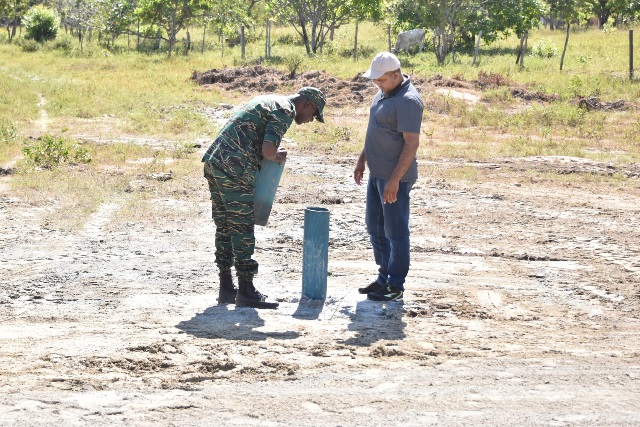 Members of the Brazilian Army’s Sixth Battalion Engineering Corps celebrate as water spurts from a well that they dug in Chukrikednau Village.

Director General of the Civil Defence Commission (CDC), Lieutenant Colonel Kester Craig and Colonel Carlos Elizio Santiago Nery, Chief of the Engineering Operations Centre, Second Engineering Group of which the Sixth BEC is a subordinate, conducted site visits on Monday, October 15, 2018 and Tuesday, October 16, 2018 to determine the status of the operations and to address any challenges.

The wells have been drilled to a depth of 80 metres or 250 feet deep and will provide continuous water supply for residents through the dry season.

In an invited comment, Toshao of Aishalton Village, Mr. Michael Thomas said that residents in the areas slated to benefit have welcomed the initiative, even as he noted that it will bring significant relief.

“First of all, I would like to thank the Government for the initiative placed in our region and our sub-district and in our villages.  We are glad for the eight wells that will be drilled in our villages.  We are going to benefit tremendously and the residents are already excited to access the water.  We have been suffering for a very long time in the Rupununi where we have to divert to creeks in the dry season but after a time, that runs out of water too, so this initiative is going to benefit us,” he said.

Mr. Regis James, who lives in close proximity to the well that has been drilled in Aishalton Village, said that for years residents have suffered but relief is now within sight.

Mr. James said that approximately 200 persons are set to benefit from the well in that village.

Another resident, Mr. Herman Ritchie, said that he too is grateful for the Project.  “During the dry season, we always have problems.  We always struggle to get water but since this new well is being done, we should benefit from it and we will be able to do agriculture and gardening.  It will also see our elderly people not having to walk a long distance to get water.  I want to thank the Government and the Brazilian Army for doing this for us,” he said.

The Brazilian team intends to hand over the project to the Guyanese authorities on November 28, 2018.

The project follows President David Granger’s State visit to Brazil in December 2017, where the Complementary Agreement to the Basic Agreement on Technical Cooperation between Guyana and Brazil for the Implementation of the Project Technologies to Reduce the Effects of the Drought in Region Nine was inked.