GECOM to adhere to NCTF guidelines during national recount

The Guyana Elections Commission (GECOM) will have to adhere to the rules set out by the National Coronavirus Task Force (NCTF) during the national recount of the March 2, 2020 votes.

This includes adhering to the national 6pm curfew and ensuring that the requisite “social distancing” measure is observed. 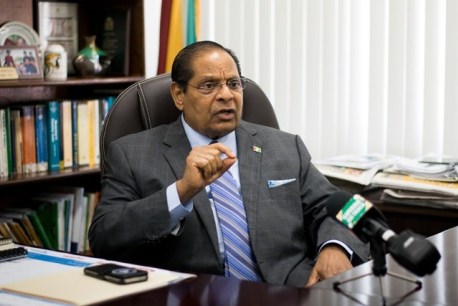 Prime Minister the Hon. Moses Nagamootoo, who is also chairman of the task force in his weekly column “My Turn”, said the entity has an “over-riding supervisory role to oversee compliance, implement and, as the case may be, alter the measures.”

The Prime Minister said while GECOM must carry out its functions, the national recount of votes will also take place during an ongoing pandemic when restrictive emergency measures are in place.

GECOM’s Chair Justice (ret’d) Claudette Singh last Friday had stated that she had made some requests to the task force.

These requests surrounded guidance on a time at which the daily recount exercise should end; the number of persons who should be safely accommodated at the recount venue at the same time; and the required protocols for quarantining persons coming from abroad, and who were invited to be part of the recount process, Prime Minister Nagamootoo said.

In response, the task force agreed that GECOM should adjust its desired 10-hour work schedule within the daily 6am to 5pm timeframe.

The task force also instructed that all persons who are permitted special entry into Guyana during this period must submit themselves to being quarantined at a government institution for two weeks.

GECOM must also allow four technical experts of the Public Health Emergency Operations Centre (PHEOC) to conduct a site visit to assess whether distancing arrangements conform to the pandemic guidelines and the published Order.

The Prime Minister reminded of the gazetted menu of measures in place to counter the spread of the virus including, the closure of Guyana’s air space to incoming international flights, shut-down of all borders, a dusk to dawn curfew, protocols for quarantining of persons and guidelines for clustering and social distancing.

He said having decided that the recount would be done at a public venue, it would be “common sense that GECOM would ascertain whether arrangements for the recount will conform to the executive orders.”

Justice Singh on Friday decided that the commission will utilize a maximum of ten workstations during the recount. There was no decision on the duration of the process, however.  She said her decision took into consideration the current pandemic and the need for social distancing.

The Caribbean Community (CARICOM), the “third party” for the recount process, had also expressed concerns over the gathering together of persons during the recount and had asked for some compromise in a 20-workstation proposal by PPP commissioners.