The Guyana Elections Commission will be requesting two additional workstations from the National COVID-19 Task Force to speed up the ongoing recount of votes cast at the March 2 General and Regional Elections.

This was disclosed by GECOM’s Public Relations Officer (PRO) Yolanda Ward while addressing the media outside of the Arthur Chung Conference Centre. 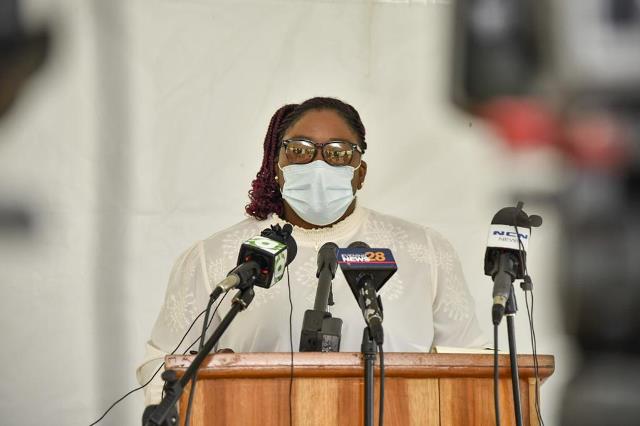 “Being cognisant that it is of national importance that this recount exercise concludes as quickly as possible, it is the intention if the Chairperson to write to the National Task Force again to seek their reconsideration for an additional two workstations,” Ward stated.

Only recently, following an assessment of the centre the task force granted permission for two more stations to be added bringing the total to 12. However, with the current pace of the recount, GECOM will be seeking guidance to have two more stations added to meet its 25-day timeline.

The PRO noted that while the Commission operates autonomously in light of the current threat of the virus it cannot work in isolation.

“We have to aware that we are dealing with a health situation and need to be sure that we do not put people’s lives at risk. While we will have to make decisions, in this particular area we must seek guidance.”

It was highlighted that during the meeting today, between the Commission and the leader of the opposition Bharrat Jagdeo, it was suggested that the working hours beyond 7pm and that 40 percent of the counting stations be allotted to region four since it has the largest number of boxes.

Ward noted that the completion of the recount exercise continues to be an ongoing discussion at the level of the elections body.  “It is a core issue at the level of the Commission since it is the wish of the commission that this process concludes within the shortest possible time.”