(March 7, 2018) – Today, the Department of Education, Georgetown opened its Biennial Regional Science Technology, Engineering, Arts and Mathematics (STEAM) Fair in the Queen’s College Auditorium. As of today, 46 exhibits have been registered and the projects will be on display until Friday, March 9th, 2018.

The 2018 STEAM Fairs are being held under the theme: “Science, Technology, Engineering, Arts and Mathematics paving the way for a green and sustainable society.” 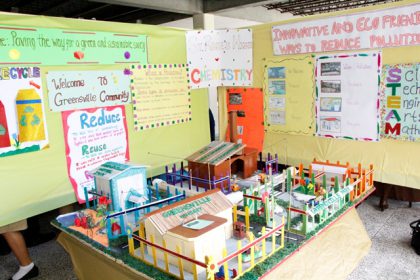 The St. Rose’s High School exhibit about the benefits of recycling.

Delivering the keynote address and officially declaring the fair open was Principal Education Officer, Mr. Immanuel Bridgewater. He said that over the years the event has evolved from being just a science fair to focus on Science, Technology, Engineering and Mathematics (STEM) to now including the Arts, thereby creating STEAM.

He said that following the regional competition, winners will compete at the national level which is slated to be held in Georgetown.

According to Mr. Bridgewater, the event serves to promote the particular subject areas in schools and the wider society. He said that participation in such an event stimulates the minds of students, boosts their reasoning skills while improving learning.

He said that STEAM requires a different approach whereby it is integrated into a system of practical application to problem-solving.

Meanwhile, District Education Officer (Secondary) and Coordinator of the event, Ms. Jeanne Jeffrey said that the projects on exhibition, if adopted and applied can solve many of the problems affecting our society today.

She said that children were tasked to identify a problem or create a hypothesis and create a project to solve the particular issue. According to her, in addition to the booths being judged, children will also be judged based on their oral presentation and their project booklets.

Ms. Jeffrey posited that the children’s participation in these events serve to benefit them in a major way since they will develop time management, organisation and communication skills; which will be beneficial in their adult life.

Among the 46 exhibits are schools from the nursery, primary, secondary and tertiary levels. However, a number of other entities have decided to set up exhibitions booths, and these include the Guyana Defence Force and the Guyana Geology and Mines Commission. 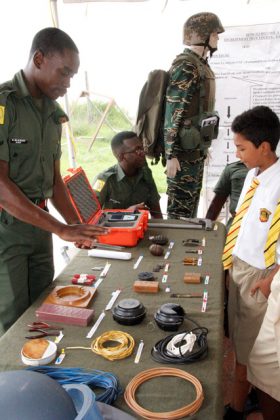 A GDF Officer explaining how some of the military grade gadgets work to a Queen’s College student.