GNBS will continue to protect consumers in 2017

The Guyana National Bureau of Standards will be rolling out a marketing and communication plan to promote the benefits of standardization and the use of the metric system.

The Bureau also plans to expand its services in key areas to ensure that local manufactures and service providers are in compliance with national and international standards. 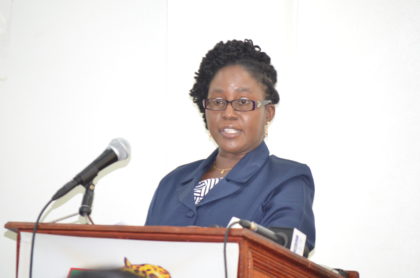 Executive Director of the GNBS, Candelle Walcott-Bostwick, told the media recently, that the GNBS will be conducting site visits to ensure that there is compliance and to encourage regulators to ensure that standards are enforced in their respective sectors.

Importers and manufacturers of commodities falling under the purview of the GNBS are required to be registered with the GNBS annually.

Cellular phones and used tyre dealers are also required to obtain permits annually to sell these commodities and to facilitate the effective monitoring of their business operations and the issuance of permits.

Walcott-Bostwick reported that there was an increase in the number of cellular phones dealers and registered importers. However, there was a decline in used tyres dealers.

She said, in 2016, the GNBS received 118 complaints in the areas of furniture, new and used tyres, cell phones and  electrical appliances.

The Director said that 11 standards were approved for 2016. These include-

Additionally, 50 electronic copies of Codex documents were disseminated to the Food and Drug Department, the Ministry of Agriculture and stakeholders to sensitise these stakeholders on the status of development of Codex standards, guidelines and codes.

The GNBS conducted 21 training programmes in 2016 representing a fifty  percent increase in training Three hundred and three participants benefited from training in nine management system standards. One hundred two training requests were received from 36 companies in 2016.

The GNBS which is the National Standards Body has the mission to promote the national quality infrastructure for economic, social development and consumer protection in partnership with key sectors through Standards, Metrology and Conformity Assessment.