GO-Invest has a positive year- CEO Verwey says Board satisfied

The Guyana Office for Investment (GO-Invest) Chief Executive Officer, Owen Verwey has reported that the board of directors has expressed satisfaction with the agency’s accomplishments for 2017.

Verwey made the disclosure, at the agency’s end-of-year press conference held at Duke Lodge, Kingston, today. 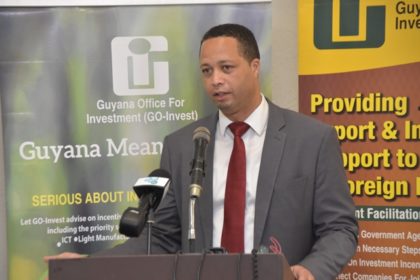 “We had a board meeting last Friday and that was expressed by the members, and it was asked to be put on record. For myself, I set high standards and I drive towards it… I am satisfied. Could there have been more, possibly yes. This is an interactive process, and an evolving process and also it is a government entity”, he stated.

According to Verwey some of the accomplishments included 120 investment agreements being processed, 2,000 jobs created, and nearly $6.5B in investments; over 46 agricultural applications were processed with 500 plus jobs created; participation in several Regional Agriculture and Commercial Expositions (RACE); over 40 local businesses facilitated through foreign exhibitions and missions, approved or agreed in principle with several Memorandum of Understandings (MOUs) with the Guyana Lands and Survey Commission, the Guyana Revenue Authority and the Central Planning and Processioning Authority among others to facilitate and process investment incentives.

The CEO noted however, that 2017 was not without its challenges. Verwey opined there is room for improvement, including the development of the agency’s staff in processing marketing needs and significant resources, and time is needed for due diligence and processing. 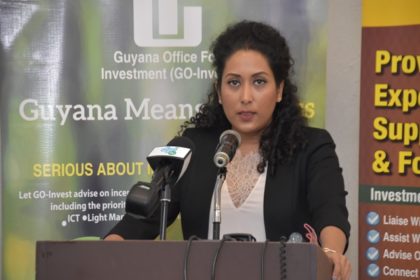 Patrica Bacchus, Chairperson for the Board of Directors of GO-Invest.

Co-Invest Board of Directors’ Chairperson, Patricia Bacchus, in brief remarks, noted that the Board is satisfied with the agency’s efforts for the year and predicted that 2018 will be better.

The Guyana Office for Investment (GO-Invest) was established under the Public Corporations Act in 1994 as a semi-autonomous body and comes under the direct purview of the Office of the President. The CEO answers to a Board of Directors which is composed of representatives from both the private and public sectors.

GO-Invest is divided into two divisions, one responsible for Investment Facilitation and Promotion and the other for Export Promotion. With these divisions, the agency offers a full complement of services to local and foreign investors, and exporters.

Its mission is to contribute to Guyana’s economic development by promoting and facilitating local and foreign private-sector investment, and exports in accordance with the country’s approved investment and export strategies.