Going green for a cause

Under the Green Generation Guyana (3G) Programme, the Ministry of Communities recently sponsored the ‘green’ segment of the Princess Pageant. This event saw participants creating outfits from recyclable material found in the environment, such as plastics and newspapers. 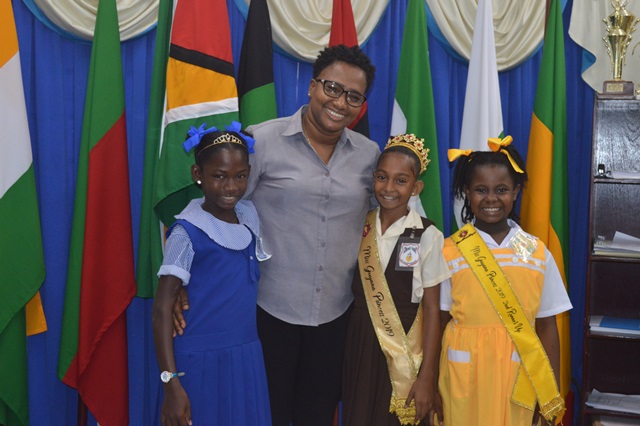 Minister within the Ministry of Communities, with responsibility for Housing, Hon. Annette Ferguson shares a light moment with winners of the Princess Pageant green segment [from left to right] Tyricka Chapman, Maya Narain and Shacmeaka Munro.

The winners were today presented gift certificates by Minister within the Ministry of Communities, with responsibility for Housing, Hon. Annette Ferguson.

Minister Ferguson said that during the simple ceremony she was “able to encourage them to ensure that they continue to promote the green economy. If they see their peers at school disposing of their refuse in an uncaring way, they must be able to say to them that, that is not how it ought to be.”

The 3G Project is a public awareness campaign aimed at sensitising children about the importance of adopting proper waste disposal habits. It began in 2016 as a public education tool, targeting mainly primary school students, as it is believed that children are one of the main conduits of promoting lifestyle/behavioural changes.

The programme has reached over 4,500 students in more than 50 schools across the ten municipalities and has grown to include 30 mini-projects. Some of the projects include the Green School Project, the Green Camps, the Green Diet, the Green Quiz, the Green Debate, the recycler’s exhibition, the National Word-Search Competition and the Green Pageant.

The Miss Guyana Princess Pageant was designed to provide each participant with the opportunity to promote school, community, talent and culture, and at the same time learn more about the other participants to encourage networking, integration and social cohesion among children.