Eight-year-old Carrington, who lives in New Amsterdam, Berbice (Region Six), earned a Gold medal in the cricket ball throw event for which he now holds the record. Carrington threw 44.75 metres, breaking the record of 44.00m previously held by Akelon Marcano in 2010. The young man also participated in the 150 metres dash where he copped the Bronze medal. 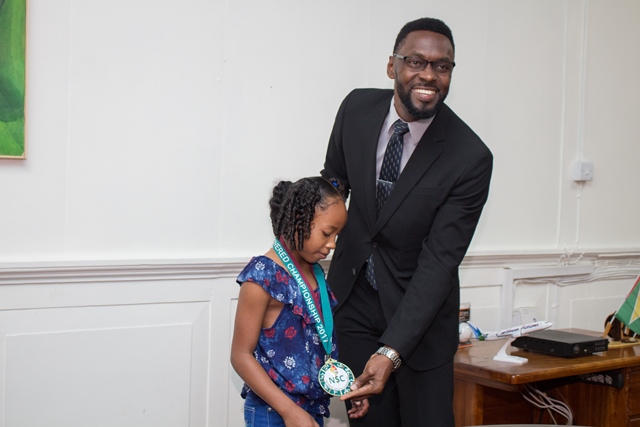 Director of Sport, Christopher Jones decorating Somayia Orna with a medal from the National Sports Commission. 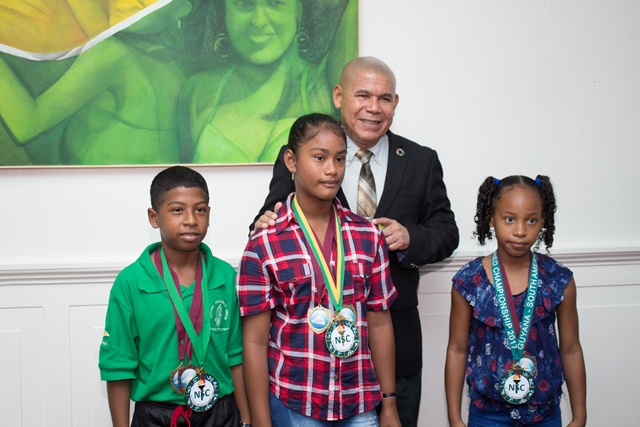 Minister of Social Cohesion with responsibility for Culture, Youth and Sport, Dr. George Norton along with [from left] Orlando Carrington, Annalee Williams and Somayia Orna.

The young athletes were today honoured for their exceptional performance by Minister of Social Cohesion with responsibility for Culture, Youth and Sport, Dr. George Norton and Director of Sport, Christopher Jones. Minister Norton congratulated the athletes and added that he is optimistic that in the future the ministry can substantially support more young athletes in their venture overseas to represent Guyana.

“The fact that these three athletes, young as they are was able to achieve gold medals, putting the golden arrowhead on the flagpole at that meeting Bermuda, I think they did well, I am proud and we are looking forward to more such performance” the minister stated.

Similar sentiments were echoed by Jones who said the enabling environment that has been created by the government, for athletes, is one of the reasons Guyana continue to shine overseas.

“In the 2019 Budget, for example, we have put some measures and mechanisms in place that would see more support being given to our athletes, subject to the approval of the National Assembly.”

The long-awaited National Sports Policy Draft is currently out for public consumption and feedback. Once completed, the document will provide the necessary guidance to the government, athletes and other sporting officials for the development of sport in Guyana.