– loan agreement “will, at the same time, help to transform Guyana infrastructural landscape boosts our manufacturing sector and improve the quality of life of our citizens” – Min. Jordan

According to Minister of State, Joseph Harmon, at his weekly post-Cabinet briefing, the agreement was recently laid before Cabinet.

“The Honourable Minister of Finance submitted to cabinet the external loan agreement executed by the government of Guyana and the Islamic Development Bank (IsDB), for the sum of US $20M to finance the power utility’s programme. Cabinet approved the loan agreement and directed that it be laid in the national assembly in accordance with Section 3:6 of the External Loans Act Chapter 74:08 of the Laws of Guyana.” 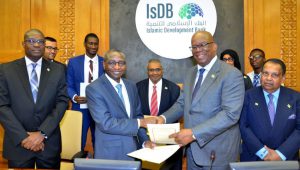 The agreement was signed on September 19, 2018, in Kuwait between Minister of Finance Winston Jordan and the Islamic Development Bank’s (IsDB) Vice President of Sector Operations Mansur Muhtar, will support the improvement of the country’s power supply through the Guyana Power and Light Incorporated (GPL Inc.).

The $4.2BILLION (US$20M) loan is part of the utility company’s Upgrade Programme, a component of its development and Expansion Programme for 2014 to 2021.

Describing the historic occasion as a celebration of the first loan to be granted to Guyana by the IsDB, Finance Minister Winston Jordan noted:

“It cemented our growing relationship and the proactive use of the indicative resource envelope for Guyana… [the loan agreement] incorporates necessary reforms and upgrades to reduce losses and improve the quality and reliability of electricity supply and will, at the same time help to transform Guyana’s infrastructural landscape, boost our manufacturing sector and improve the quality of life of our citizens… The United Nations 2030 Agenda espouses aspirations for human dignity. Undoubtedly, the objective is ‘to leave no one behind’. This laudable objective is in keeping with the principles of the Islamic Development Bank. It is also the cornerstone of my government’s approach to development. This, is perhaps, why we have been able to establish such a close working relationship, in such a short period.”

Adding that the agreement could not have come at a more opportune time, the Finance Minister said:

“This was especially since, Guyana is on the cusp of a historic transformation with the recent discovery of over 4B barrels of oil.”

Minister Harmon further disclosed that the IMF described Guyana’s medium-term economic prospects as “very favourable” and predicted GDP will grow by 29.1 per cent in 2020.

“The IMF has commended us on our “prudence and restraint towards borrowing in anticipation of future oil revenues”. As such, our public debt stood at a highly sustainable 52.2 per cent of GDP at the end-2017.”

According to the Finance Minister, Winston Jordan, the government looks forward to working with the IsDB on projects in several sectors, including agriculture.

“I wish to express gratitude to the Bank for the Reverse-Linkage Project, which will assist in updating Guyana’s expertise and technology in rice production as well as introduce innovative rice varieties in Guyana… This support will result in better care for the elderly.”

Minister Jordan said as he also expressed gratitude for the Grant for the Modernisation and Upgrade of the Palms Geriatric Facility.

During the period 27-29 November 2017, the Islamic Development Bank’s (IsDB) mounted a mission to Guyana to develop a medium-term work plan for the period 2018-2022. That plan outlines a pipeline of projects that the bank can support over the next five years. The IsDB has a resource envelope of over $188BILLION (US$900M) that is potentially available from which the government can source.

The potential areas of collaboration between the IsDB and the Government of Guyana cover several development sectors including agriculture, banking and finance, human development, energy and rural development.