Minister within the Ministry of Indigenous Peoples’ Affairs, Valerie Garrido-Lowe said that the government is committed to providing economic empowerment, and restoring the dignity of the Indigenous peoples.

Minister Garrido-Lowe was addressing the over 200 indigenous leaders gathered at the 11th National Toshaos Council (NTC) Conference, today, at the Cyril Potter College of Education (CPCE).

Minister Garrido-Lowe noted that the government is working for the benefit of each and every Guyanese. She told the Indigenous leaders that, “It has only been a few months since two years in office and the amount of work that each Ministry and each Minister has done, is deserving of recognision. Don’t worry we are not asking for it, we are just happy that we are getting things done for your benefit. All may not be to your liking or what you are acustommed to, but it does not mean that it is wrong, it simply means that some things were not right and we have begun fixing them.” 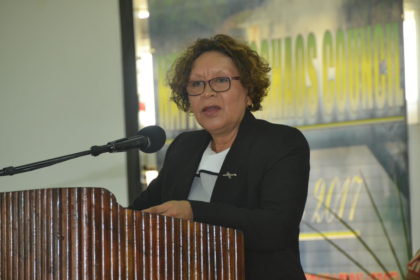 Minister within the Ministry of Indigenous Peoples’ Affairs, Valerie Garrido-Lowe during her address at the opening of the National Toshaos Council (NTC) conference

The Minister  noted that this year was a challenging one for the Indigenous people, who suffered great losses as a result floods due to heavy rainfalls in Region Seven, Eight and Nine. Farmlands were washed away and homes completely destroyed. Despite these challenges, Garrido-Lowe took the opportunity to express gratitude to all those who generously supported (them) during, what she described as a ‘troubling time.’

Notwithstanding the challenges, the Minister said that the Indigenous people have much to celebrate, whilst assuring that the government is committed to ensuring projects and programmes are created and implemented to drive the economic development in all hinterland communities.

Community based tourism is one of the main areas that the government is focusing on, Minister Garrido-Lowe said. She noted that the indigenous peoples’ as ‘keepers of the forest’ have a wealth of knowledge to share.

“What has to be done now is to develop an eco-tourism product so that tourists can come and enjoy our greenness. We want to see our Indigenous peoples leading in the tourism sector in this country, which is the second highest revenue earner for our country,” Minister Garrido-Lowe explained.

“It is not hard to imagine either Indigenous and hinterland peoples taking the lead in the operation of successful eco-tourism businesses. You live there and you know the eco-system, the birds, the trees, the insects, the rocks.

Unless you operate a community based tourism business, you will not be able to earn as you should,” Minister Garrido-Lowe told the Indigenous leaders. She urged them to become more engaged in agriculture, since the hinterland is blessed with fertile soil, great for planting crops such as ground provision and citrus fruits.

The struggle with finding markets for produce is known, she said, but noted that the Pakarima Sun-dried Tomato project is a model for which communities can follow to preserve their produce.

She promised that the administration will be willing to support any project that enhances the livelihood of the Indigenous people.