“Gov’t has your back” – Minister Ally assures RUSAL workers

Minister of Social Protection Hon. Amna Ally has reiterated the government’s full support for the 326 workers dismissed by Bauxite Company of Guyana Incorporated/RUSAL.

The minister and her team met the laid-off workers at the Kwakwani Recreational Centre today.

Minister Ally was warmly received by the workers and their relatives who used the meeting to express their frustration. She assured them that the government would not rest until the issue was resolved. 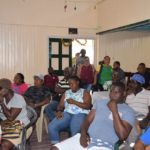 Some of the RUSAL workers who met with Minister of Social Protection Hon. Amna Ally and her team. 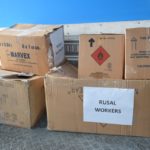 Some of the hampers presented to the workers.

“I want to say to you this morning that you can be assured that the Department of Labour isn’t selling you out and the government is on your side, and like I said earlier, we have alternatives,” Minister Ally stated.

She also urged the workers to be patient and avoid altercations in the interim.

“So, one way or the other, whichever six months we have, we will make full use of it. And be assured that six months or no months, we will go to arbitration.”

Minister Ally also distributed several food hampers during her engagement with the workers.

Marcy Agard, a wife of one to the former RUSAL employees, expressed their appreciation.

“It was really indeed a pleasure having her here and we as wives of employees who were laid off from RUSAL, we appreciate her a lot and what the government and the union is doing for the workers here at Kwakwani and Araima.”

The company initially laid off 142 workers in January saying a fuel shortage had forced them to scale down operations. A week later they announced the dismissal of an additional 288 workers.

The frustrated workers then blocked a section of the Berbice River at the Kwakwani riverfront.

The Department of  Labour had called for the reinstatement of the laid-off workers at the last meeting with the RUSAL executives.