Govt is on your side – Min. Ally assures Rusal workers

As the standoff between the United Company Russian Aluminum (RUSAL) and its Guyanese employees continues, Minister of Social Protection Amna Ally today assured the displaced workers that the government stands solidly behind them.

Minister Ally and Minister within the Ministry of Social Protection with responsibility for Labour Keith Scott visited the aluminium company at Maple Town, Aroaima earlier today, where more than 61 workers were dismissed following strike action against the company. The Ministers’ visit was to meet with the workers themselves and hear of their concerns. Seventy-five hampers were also distributed to the workers. 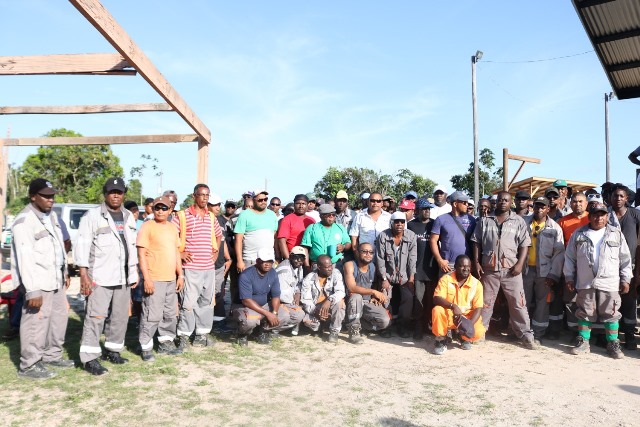 Some of the dismissed workers of RUSAL today. 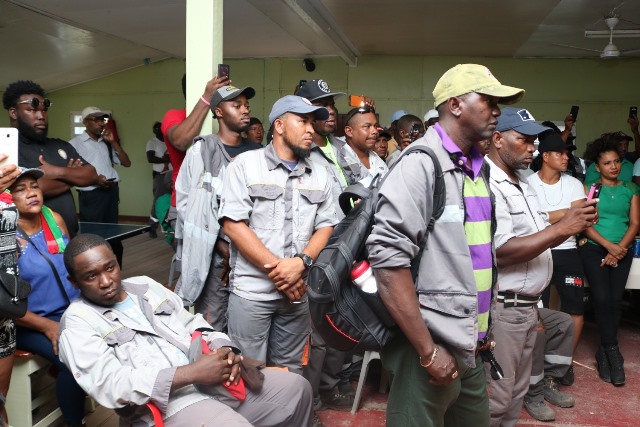 The ministerial team met first with the representatives of the Guyana Bauxite and General Workers Union (GBGWU) where secretary Leslie Junor laid out a proposal the union hopes will be taken on board by the company before the workers resume duty.

These include respect by the company for the workers Union. According to the union executives, the company has been blindsiding the union, asserting that its operation is illegitimate. The workers are also demanding vacation benefits which have been cut out. they are also calling for a comprehensive safety audit to be conducted. Workers said too that the company has breached the Workers Act and has continually refused to meet with their representatives.

Minister Ally, while acknowledging the many concerns, said workers needed to “stay put.” She recalled the meeting she, along with other government ministers had with RUSAL representative, Vladimir Permyakov and Director of Alumina and Bauxite Department, Sergey Kostyuk on Thursday and the demands put to them including the reinstatement of all dismissed workers, which she believes will happen very soon.

Another issue addressed was the issue of the non-recognition of the trade union.

“There was a legitimate poll and this union is recognised and nobody from outside cannot come and tell us which union. There is a trade union recognition board and that board has authenticated this union and so we are not going to settle for anything less than that,” she said to rousing applause.

The Social Protection Minister stressed that while workers must be respected, they too have a responsibility to respect the other side.

“I want to say to you that workers on sight are licensees and so nobody cannot put you out of here… what I want to underscore to you, is that the government is on your side and at no time must you feel that we are not supportive of you.”

Minister Ally said the finer details of the issues will be worked out by Minister Scott and Chief Labour Officer Charles Ogle along with other officials from the Labour Department.