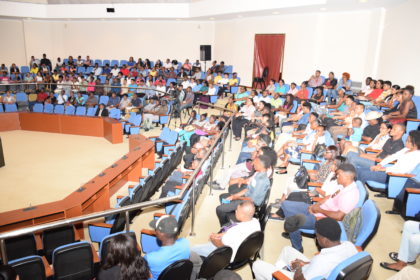 Approximately 350 students who have been accepted into public tertiary learning institutions have benefitted from scholarships through the Ministry of the Presidency’s, Department of Public Service.

During an orientation held at the Arthur Chung Convention Centre on Saturday, the students were briefed on what the Government’s programme offers, and what is expected of them after completion of the scholarship.

Larry Carroll, who has benefitted from a government scholarship in the past said that the opportunity provided has given him greater appreciation for his education since he never had the burden of worrying about his financial maintenance during the five years. 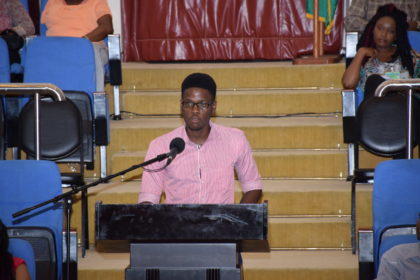 Past beneficiary of a government scholarship, Larry Carroll

“I have never been wanting in terms of fees at the University of Guyana. I remember when I had to do my final thesis, my Administrative costs and some other expenses would have come up to over $ 100,000 and a request was made to the Ministry of Public Service then, Department of Public Service now and within a few weeks it was granted,” Carroll explained.

The Government of Guyana, through the Department of Public Service has been granting scholarships to students, giving them the opportunity to attain a tertiary education at the certificate and diploma levels.

Permanent Secretary of the Department of Public Service, Reginald Brotherson explained that the majority of the successful applicants are now students of the University of Guyana (UG). 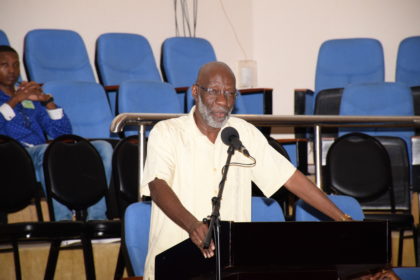 Vincent Alexander, Technical Advisor to the Minister of Education

Brotherson said, “This year is almost a record number of scholarships being offered to you students, both at the University of Guyana which has 83% of the scholarships offered locally, and the rest to the Guyana School of Agriculture. The government actually is not in a reactive mode, the government is in a planning mode, and we recognised that it is necessary that we must have investment in education.”

Students benefitting from this year’s scholarship programme would have been accepted into a number of institutions namely UG, Burrowes’ School of Art, GSA, and Carnegie School of Home Economics.

Advertisements were published, inviting applicants whose minimum requirement was being accepted into a tertiary institution to be eligible for a scholarship. These applicants, upon completing the education programmes will be provided with jobs, a binding agreement offered by the government, encouraging them to serve their country for a period of three to five years.

Vincent Alexander, Technical Advisor to the Minister of Education and a past beneficiary of a government scholarship urged the students to capitalise on this opportunity.

“The fact that you have received a scholarship means that, on the graph of achievement you have already started to make a mark and the scholarship offers you an opportunity to continue along that graph, and hopefully you will make many more marks as the years go by,” Alexander said.