The Ministry of Social Protection is partnering with the International Labour Organisation (ILO) to changeover Guyana’s Labour Administration from the informal to the formal economy to better protect workers.

This was revealed at a two-day “Labour administration and its relationship with the informal economy” workshop, which opened today, at the Herdmanston Lodge. The workshop which is being attended by Labour officers from various government agencies is exploring ways and means of addressing the informalities in the labour force.

Minster of Social Protection Amna Ally, said the prevalence of informal employment in Guyana has consistently been on the rise.  She pointed out that people enter the informal economy not by choice, but out of a need to have access to basic income-generating means and to sustain their livelihoods. 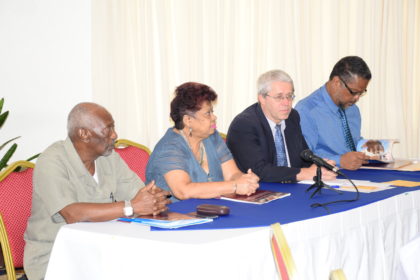 “The informal economy thrives in the context of high unemployment, underemployment, poverty, gender inequality and precarious work. It is also relatively easy to enter as there are sometimes no educational requirements, skills or technology barriers,” Minister Ally explained.

Additionally, Minister Ally noted that all of the factors causing the informal economy to thrive constitute a significant impediment to the development of sustainable societies, and can have lasting impacts on developing countries. She posited that the government therefore, sees the workshop as necessary and is committed to working together with all stakeholders towards addressing the needs of all in the informal economy.

Minister within the Ministry of Social Protection Keith Scott, explained that transitioning from the informal to the formal economy is necessary to eliminate poverty and the lack of protection. The Minister said this will contribute to attaining the eight of the 17 recommended Sustainable Development Goals (SDGs).

“The magnitude of the risks and hazards to which workers in the informal sector are exposed are so substantial that they pose a direct and indirect challenge to human development and the attainment of a “Good Life” to which every citizen of Guyana is entitled,” Minster Scott explained.

The Minister further explained that with an informal economy, all economic activities by workers and economic units in law or in practice are insufficiently covered by formal arrangements, and must be stopped.

According to Minster Scott, the informal economy constitutes approximately 50 to 90 percent of the total economy. 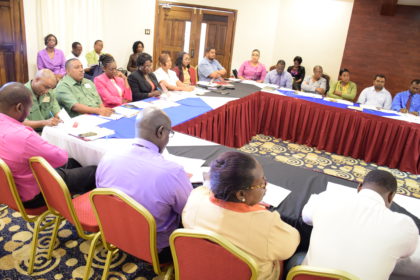 Some of the participants at the workshop at Herdmanston Lodge

Additionally, the Minister highlighted that in relation to lack or insufficient protection in the informal economy, between 2011 and 2014, the National Insurance Scheme (NIS) disbursed a total of $48.7B to employees in the formal economy. Any benefit to those in the informal economy, during the same period, was unquantifiable, “but on the balance of probabilities will be far less if not negligible.”

Senior Specialist at ILO, Rainer Pritzer said ILO has begun and continues to look at the Decent Work Country Programme (DWCP) which it will soon finalise.  “Many times references have been made to situation about workers and businesses in the informal economy, so hence we took up the call and before the finalisation of the DWCP, we are already back to start concrete work in this area,” Pritzer noted.

The ILO has generated additional funds for Guyana which happens to be the only country in the Caribbean receiving additional money to help in implementing the decent work agenda, Pritzer added.

Chief Labour Officer, Charles Ogle added that the workshop which also targets workers in other departments is expected to sensitise participants on the relationship between labour administration and the informal economy. Ogle explained that in 2013, ILO Regional Office for Latin America and the Caribbean launched the programme for the promotion of formalisation in Latin America and the Caribbean.

The programme has three components; the generation and dissemination of knowledge on formalisation policies, technical assistance to specific countries and capacity building of workers and employers organisations in formalisation.

The workshop’s participants are drawn from the Guyana Geology and Mines Commission, Guyana National Bureau of Standards, Guyana Forestry Commission, NIS, and the Ministries of Business and Social Protection.