The Police efforts to boost ICT and sports got a shot in the arm with a donation from the ZARA Realty Group. 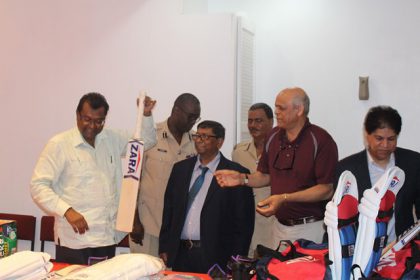 Minister of Public Security, Khemraj Ramjattan examining some of the sports gear along with members of the ZARA Group Sobhraj, Nardeo Singh and Sravan Kumar.

The sports gear and computers which amounted to over 3.8 million dollars was donated by Jay Sobhraj, Nardeo Singh and Sravan Kumar. The presentation took place at the GPF Headquarters, Eve Leary in the presence of Public Security Minister Khemraj Ramjattan, Acting Commissioner of Police David Ramnaraine and senior police officers.

Minister Ramjattan described the donation as beneficial. He recalled that during last evening’s debate of the Juvenile Justice Bill, in the National Assembly, it was agreed that education and sports will play a critical role in curbing negative attitudes.

“All across the aisle, both the opposition and government, accepted that getting non-law enforcement policies and programmes into the effort is going to help. For example, education through IT and sports and involvement in cricket and football and basketball. Because when you involve youths in these activities, there are positive effects.”

Sravan Kumar said that the group’s goal was to make a positive impact in the country. “We are hoping that this gesture would be a start to building a relationship with the community. It is all about building bridges,” Kumar stated.

Building partnerships with community residents and support organisations is one of the major tasks the Guyana Police Force has been focusing on towards addressing crime in the country. 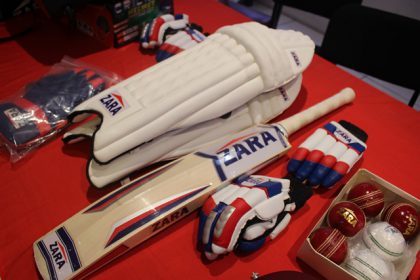 Some of the sports gear donated.