President David Granger, today, said that he has invited the other Heads of Government of the Caribbean Community (CARICOM) to encourage their business communities to see Guyana as the new horizon for development, especially in the areas of agriculture and tourism. As Guyana moves to develop its oil and gas sector, with the significant petroleum discovery by Exxon Mobil, the President added that as a mature nation, Guyana is looking to properly manage its resources to ensure a bright future for all Guyanese.

The President, who was at the time responding to questions from journalists during a break of the Caucus of the Thirty Seventh Regular Meeting of the Conference of the Heads of Government of the Caribbean Community’s at the Pegasus Hotel said, “We expect that some of the proceeds from the revenue will go into the sovereign wealth fund and we will use the surpluses to develop our education system. So we are quite mature and we know what we are going to do when the revenue starts to flow so what I have to say to the Guyanese people is that they can look forward to a higher quality of life,” he said.

With the potential of a booming oil and gas sector on the horizon, the Head of State reiterated his stance that Guyana is open for business not just from international investors but also from members of CARICOM and the wider Caribbean. 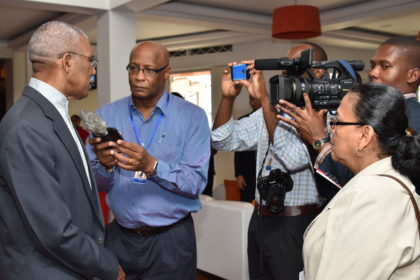 President David Granger speaking with media operatives, earlier today, at the Thirty Seventh Regular Meeting of the Conference of the Heads of Government of the Caribbean Community at the Pegasus. (GINA photo)

The President, who had called for Caribbean investment in Guyana last year said, “The invitation is still extended because the states of the Caribbean particularly Trinidad, Barbados, Jamaica have well developed business communities and I am sure that they will be able to take a message back to their countrymen in the business sector to see Guyana and Suriname as well as a new horizon for development in agriculture and tourism.”

The Head of State noted that Guyana has great potential, particularly with its emerging eco-tourism sector and he expects that advantage will be taken of this national patrimony. He announced that Prime Minister of Barbados, Hon. Freundel Stuart will join him on a trip to Santa Fe in the South Rupununi to explore investment potential in that region.

The Thirty Seventh Regular Meeting of the Conference of the Heads of Government of the Caribbean Community (CARICOM) will conclude today.