Bilateral ties between Guyana and Qatar were further strengthened today with the accreditation of Qatar’s ambassador to Guyana.

Accepting the Letters of Credence from Qatar’s Ambassador H.E. Al-Abdulla, His Excellency, President David Granger said relations between the two nations began 23 years ago and is founded on mutual respect for each other’s territorial integrity, non-interference in internal affairs, cooperation for mutual benefit, respect for treaties and international laws and maintenance of regional peace and security. 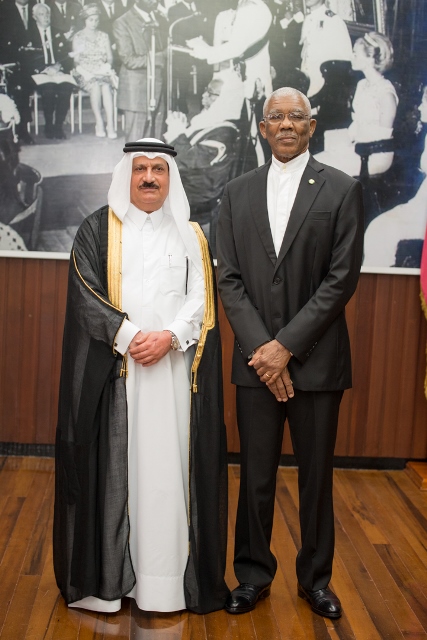 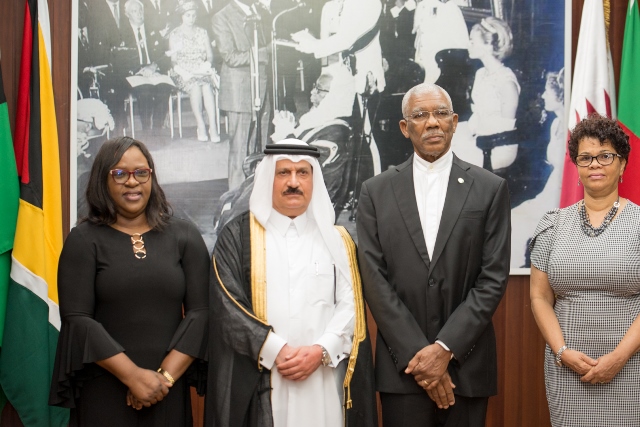 The Head of State referenced the recent signing of an Air Services Agreement with Qatar, on the sidelines of the 40th General Assembly of the International Civil Aviation Organisation, in Montreal earlier this month.

“Guyana and Qatar have strengthened their bonds of friendship further with the signing of the Bilateral Air Services agreement only last month on the 24th of September. This will pave the way for future cooperation in investment, in trade, and air travel and also hopefully in the movement of people. Guyana welcomes this important initiative and remains committed to working with the government of Qatar to enhance air connectivity to link the Caribbean and the Middle East.”

To further promote the movement of goods and people between the two countries, the president further expressed his wish to deepen ties with the Middle Eastern state.

“… in trade, capacity building and education. I also wish to suggest that new fields in cooperation, especially in energy and tourism be explored. Guyana is keen on enhancing partnerships with experienced petroleum producers such as Qatar,” he stated.

President Granger further noted his confidence that the ambassador’s appointment will provide the opportunity for fruitful discussions, and exchanges, on the oil and gas sector for both countries. He also spoke of Guyana’s commitment to working with the United Nations and the Organization of Islamic Cooperation, and deepening its engagements and cooperation relations with Qatar through these organisations.

“…as we seek common approaches and common solutions to address global challenges. Guyana is committed to becoming a ‘Green State’… which will see greater emphasis being placed on the protection of the environment, the preservation of its bio-diversity, the promotion of renewable energy use and the adoption of practical measures to ensure climate change.”

H.E. Ambassador Al-Abdulla, in his remarks, notes that both countries have enjoyed excellent relations despite the geographical distance between the two.

“I am looking forward to cooperating with members of your government, to develop and enhance the already exciting, cordial relations between both of our countries. Let me reiterate my thanks, and consideration, to your Excellency.”

Guyana and Qatar established formal diplomatic relations on August 23, 1996, and, since then, have collaborated at the multilateral level through organizations such as the United Nations and the Organization of Islamic Cooperation.

Ambassador H.E. Al-Abdulla, who succeeded Ambassador Ahmad Al-Hayki, will be resident in Brazil.