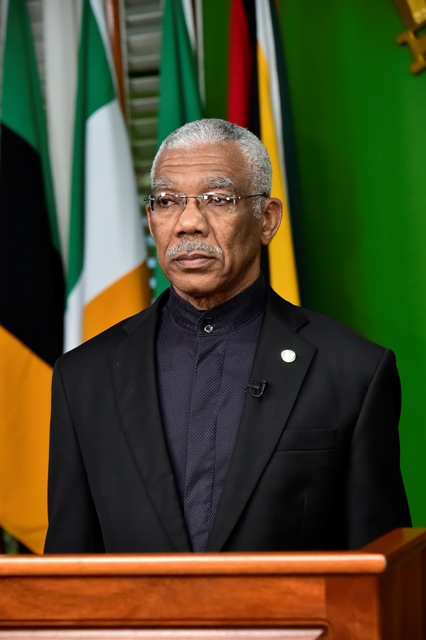 As Guyana celebrates 54 years as an independent nation, His Excellency, President David Granger reminded Guyanese that this anniversary signifies the sacrifices made on the road to the country gaining self-governance on May 26, 1966.

“We celebrate the 54th Anniversary of Independence recalling the sacrifice, suffering and struggle of our working people who struck the first blows against colonial oppression one hundred and fifteen years ago in Georgetown,” President said in his address to the nation.

In his remarks, the Head of State noted that the year 2020 marks the commencement of the country’s Decade of Development “which charted a roadmap for development to provide a ‘good life’ for everyone.”

According to the Head of State, development has been taking place across all sectors and has been transforming the lives of the Guyanese people.

“Workers and persons in difficult circumstances  have started to benefit from increased wages and pensions, improved public services in the four new regional capital towns, improved education and employment opportunities and enhanced empowerment through regular local government elections,” he remarked further noting that citizens can look forward “enjoying greater equality and a higher quality of life in an expanding economy over the next decade.”

He explained that with Guyana now being a petroleum state, the transformation of the country’s economy will accelerate and see significant developments in key sectors such as education, telecommunication and environmental.

The Head of State also highlighted that since gaining independence, Guyana established diplomatic relations with other nations on the principles of mutual respect for each other’s territorial integrity and sovereignty, non-interference in each other’s internal affairs, respect for treaties and international law and the rejection of the use of force to settle international disputes, among others.

In light of the COVID-19 pandemic President Granger called on Guyanese to “observe the 54th Anniversary of Independence in a restrained manner.”