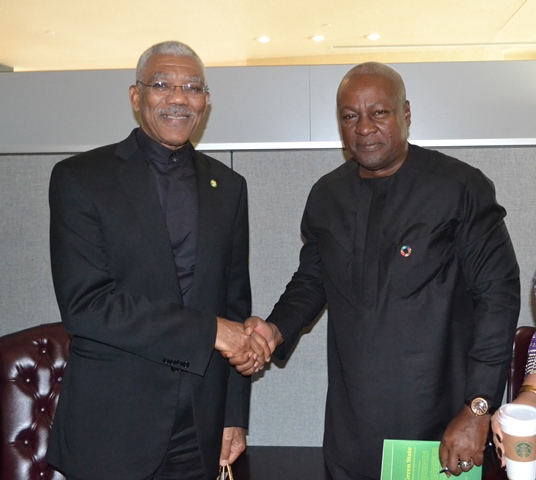 President David Granger and President John Dramani Mahama of Ghana following a bilateral meeting on the sidelines of the UN General Assembly in New York.

top of the agenda for a series bilateral engagements being conducted by President David Granger on the sidelines of the United Nations’ 71st General Assembly.  Even as the Head of State represents Guyana’s cause with regard to the 50-year-old threat to Guyana’s sovereignty, the push to transform Guyana into a ‘green’ state has also resonated in meetings with President Hage Geingob of Namibia, President John Dramani Mahama of Ghana, President Robert Mugabe of Zimbabwe, Prime Minister Josaia Voreqe Bainimarama of Fiji and Minister of State of the Foreign and Commonwealth Office, Baroness Anelay.

“The message of Guyana has been consistent in all of these bilateral [meetings] and we feel that the visit so far to the United Nations’ General Assembly has served Guyana’s national interest and has given Guyana an image, in the international community, as a reliable partner on the entire green agenda and on the climate change agenda,” President Granger said in an invited comment.

The President noted that Guyana’s ‘green agenda’ policy comes at an opportune time as the world has begun to recognise the serious nature of the effects of climate change and the signing of the historic signing of the Paris Agreement at COP 21 has created the international will to act to mitigate impact. He said, “I discussed Guyana’s ability to fulfil its obligations under the Agreement.  So the [Sustainable Development Goals] SDGs are central to our development and we have extracted from the SDGs, the green elements, which in my view can satisfy Guyana’s need for economic development, for energy, for environmental protection and also for the employment of young people. It is the right time because the United Nations has thrown its weight behind that programme and the adoption by Guyana of the ‘green agenda’ coincides absolutely with what the United Nations is doing.”

Guyana, the President believes, is set to receive more international support from those countries, which generate a lot of green house gases.  “Because the line we have taken is that our forests actually help the earth to breathe… Guyana is an asset to Mother Earth and being part of the Guiana Shield gives us greater leverage in making that argument,” he said.

During the meeting with Baroness Anelay, President Granger iterated the importance of the advancement of the Security Sector Reform 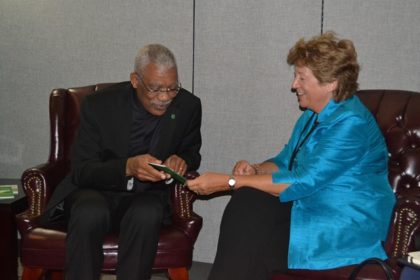 Minister of State of the Foreign and Commonwealth Office, Baroness Anelay met with President David Granger at the United Nations in New York, on the sidelines of the 71st General Assembly.

Action Plan even as she indicated that the United Kingdom, under new Prime Minister Theresa May, even with the BREXIT vote, remains committed to Guyana and CARICOM as a whole.

Following that meeting, President Granger disclosed that the implementation phase of the Action Plan is imminent.  “We are now on the brink of receiving a team; a team came to do the scoping and another team is going to come to actually do the implementation of the first phase.  So I would say that in the last 16 months we have covered a lot of ground to restore the Security Sector Reform Action Plan, as fast as we could and within weeks it is going to be happening,” he said.

The Head of State emphasised the importance of reform in the security sector, noting that Guyana has extensive borders and hinterland areas that are difficult to police.  He added that the police force needs to be well equipped and trained and this Action Plan is part of what is needed to ensure security.

President David Granger during a meeting with President Hage Geingob of Namibia.

Referencing the discovery of an aircraft in the Rupununi, Upper Takutu-Upper Essequibo Region, President Granger said, “Guyana still does not have the capability to protect its long borders and its vast hinterland from being penetrated by illegal aviators and this emphasises the need for security sector reform… I would like to see a better equipped police force; I’d like to see policemen better paid and I want to see police units with boats, with all-terrain vehicles and with aircraft.  We are obviously losing a lot by not being able to protect our hinterland.  We know that there is not only illegal migration but there is also the smuggling of narcotics; there is also contraband; there is also gun running; there is also trafficking in persons and these offences, these crimes are going to be stamped out with a more efficient police force.”

During bilateral meets, President Granger also used the opportunity to update the Heads on the status of the Venezuela border controversy and iterated Guyana’s call for a juridical settlement.  The President also expressed his appreciation for the level of engagement demonstrated by Secretary- General Ban Ki-moon.  Meetings are expected to continue this week.