A sustainable economic base is needed for the development of Guyana and the wider Caribbean Minister of Finance Winston Jordan said.

The Minister was giving the feature address today at the launch of the United Nations Development Programme (UNDP) Caribbean Human Development Report (CHDR) at the University of Guyana’s Education Lecture Theatre, Turkeyen. 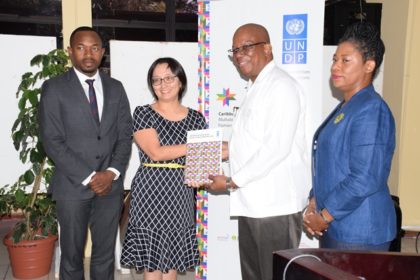 The first of its kind, the Caribbean Human Development Report titled ‘multidimensional progress: human resilience beyond income’ sought to address the vulnerabilities and key strengths of Caribbean countries.

The CHDR found, among other things, that there was sluggish economic growth across the Caribbean. Also, there is increasing human vulnerability in the Caribbean particularly among women, youth and the elderly.

“There is need for comprehensive polices which must be developed and institutionalised to protect populations suffering from discrimination and historical exclusions. In the final analysis a sustainable economic base is what is needed if development is to take place,” Minister Jordan said.

Caribbean states must be decisive in its actions to address the challenges that hinder development in the region, Minister Jordan added. “This current report is the first of its kind with a regional perspective where governments in the Caribbean are being summoned to work together to arrive at a workable timetable of activities for achieving the 2030 Agenda,” Minister Jordan pointed out.

At its core, the UNDPs 2030 Agenda for Sustainable Development seeks to eliminate poverty in all its forms across the world and take a multidimensional approach to development. “Achieving sustainable development will require significant investment from international private actors….which nonetheless will depend on the availability of public funds to match those investments through the provision of guarantees and or regulations to assure future revenue streams,” Minister Jordan said.

The CHDR builds on the 2016 Regional Human Development Report for Latin America and the Caribbean.  As the Region recovers from a low growth spurt as a result of the global economic crisis it is important to ensure that the benefits of that growth is distributed to all members within a country’s society, Kenroy Roach, Regional Advisor of the UNDP RBLAC pointed out.

Roach presented the key findings of the report along with recommendations for the findings. “We have created a number of tools that will help policy makers land these recommendations,” Roach said.