MOTP, Georgetown, Guyana – (August 24, 2016) Minister of State, Mr. Joseph Harmon said that his recent participation at public administration and public service conferences in Putrajaya, Malaysia, last week, has resulted in Guyana receiving several offers of assistance to support the enhancement of its public service. The engagement was essentially three separate forums rolled into one; the International Conference on the Blue Ocean Strategy, the Biennial Conference of the Commonwealth Association of Public Administration Management and the Meeting of Ministers of the Public Service in the Commonwealth.

He explained that Guyana was offered assistance by the Commonwealth to retrain existing public servants on current methodologies and also for the preparation of the curriculum for the Public Service Staff College. 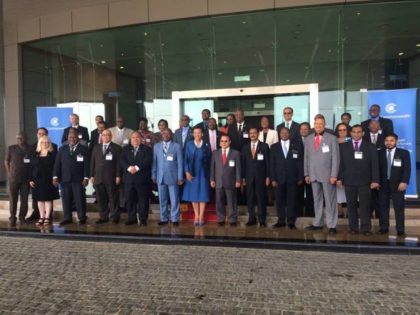 Minister of State, Mr. Joseph Harmon (sixth from right-second row) with participants at the conference in Putrajaya, Malaysia

Additionally, Guyana was given the option by the Commonwealth Secretariat to host the 2018 edition of the conference, but Minister Harmon explained that a formal offer has to be made to the Government, which will then have to be deliberated on by the Cabinet before a final decision is made. “This is a huge step, there is great potential. These conferences allow you access to the persons who will give access to the resource to develop what you have,” the Minister said.

Giving an update on the Public Service Staff College, Minister Harmon explained that the introduction of this institution will see a significant change in the culture of the public service. Already, 55 young individuals have been identified to be trained in the first batch.

He explained that the Government is looking at three tiers of training for public servants. The first is the entry level, where people are trained for a period of eight months at the end of which they will receive an equivalent qualification to that of a university diploma. The second tier target existing public servants and keep then abreast with relevant skills and systems. Finally, the third tier is designed for senior public servants such as permanent secretaries and other upper-level public officers.

The Minister also spoke about how Malaysia used its National Blue Ocean Strategy to provide more efficient public services to its people by bringing together all public offices in central hubs that operate seven days per week, 24 hours per day.

He said that this is what the Government of Guyana is looking at and noted that the ministerial outreaches, while only a temporary arrangement, is a step in the right direction so as make public service more accessible to ordinary Guyanese.

The Minister was accompanied by Head of the Scholarships Division in the Department of Public Service, Ms. Soyinka Grogan.