According to Minister of Legal Affairs and Attorney General, Basil Williams, “Guyana has done something that is unprecedented in the FATF world. Within a year of a new government, we are poised to exit both FATF and CFATF, in fact having completed all the key and core recommendations.” 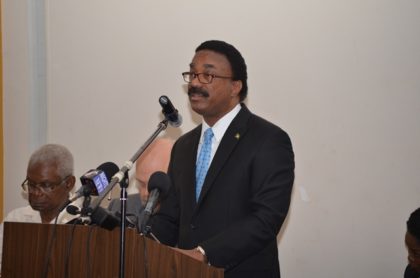 The Minister, addressing media operatives at his office, Carmichael Street, Georgetown today, explained that having fulfilled all the recommendations of CFATF, Guyana is now in a position to exit the monitoring process. However, this will only be accomplished after the successful on-site visit to be conducted by FATF’s on-site five member team to Guyana on September 14-15.

The purpose of the visit is to verify whether Guyana has introduced the reforms recommended in the Action Plan agreed between FATF and Guyana.  The visit will also confirm whether there is political commitment to sustain the reforms.

The visit is necessitated by the fact that, “Guyana had been referred under the previous government, to the FATF process after being subjected to three public statements and still hadn’t corrected or implemented the required recommendations,” the Attorney General explained.

“Guyana has prepared for this visit by having its AML/CFT Compliance Team led by the Attorney General and Minister of Legal Affairs Basil Williams conducting, meetings with key agencies  including the FIU, SOCU, and the Bank of Guyana, to sensitise them on their AML/CFT obligations,” Minister Williams explained.

Addressing the readiness of local agencies, Minister Williams said, “When we conducted on site sensitisation meetings, I was personally very impressed with the various institutions and organisations and their compliance arrangements. I found that most of them had compliance officers and most of them were very aware of the requirements of FATF. We are talking about the Guyana Gold Board, cambios, banks, I was very impressed with the cambios too, money transfer agencies.”

According to Attorney General, at the FATF plenary and working group meetings’ held in Busan, Korea from June 18- 24, 2016, the Plenary adopted the FATF/ICRG Co-Chairs’ Report that it recognized that Guyana has substantially completed its Action Plan at the technical level.

In line with the procedures for removing jurisdictions from ICRG review, the ICRG recommends that an on-site visit take place to the country prior to the October 2016 Meeting in order to verify that the implementation of its AML/CFT reforms have begun, and are being sustained, and there is political commitment to sustain implementation.

The FATF team will meet with the Attorney General and Compliance Team, the Minister of Finance, the Director of Public Prosecution (DPP), supervisory authorities including the Bank of Guyana and Securities Exchange Council, and reporting entities such as Republic Bank, GBTI, Western Union Money Transfer and Confidential Cambios.

The result of the on-site visit will be on the agenda at the next FATF Plenary meeting scheduled to take place in October 2016 in Paris.

Two important CFATF Ministerial Meetings in Miami, Florida will be held from September 6-9, 2016 which Minister Williams will be attending. Topics for discussion will include an overview of the core work of the CFATF, activities of its Steering Group and the strategic plan, De-Risking/Loss of Correspondent Banking Relationships, Transparency and Beneficial Ownership and Fourth Round Mutual Evaluation.

With a successful on-site visit, a motion will be moved at the next meeting to be held in October 2016, for Guyana to exit the monitoring process.