Preliminary results for the Caribbean Secondary Education Certificate (CSEC) Examinations have revealed that Guyana recorded a marginal increase in the overall pass rate.

The results which were announced by Ingrid Trotman, Assistant Chief Education Officer Nursery at the National Centre for Educational Resource Development (NCERD), Georgetown, today, indicated that there was an overall pass rate of 63.39% compared to 62.72% in 2015.

Permanent Secretary of the Ministry of Education, Delma Nedd then explained that the Ministry is not satisfied with the results, citing that there is a decrease in the overall pass rate for mathematics which declined to 38.37%, compared to 45.07% in 2015. 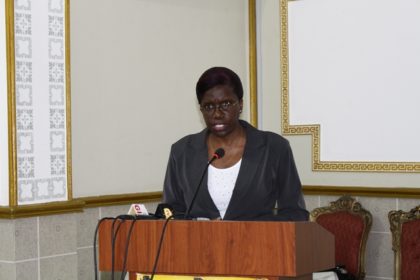 Permanent Secretary of the Ministry of Education, Delma Nedd

The overall performance in Chemistry was also unsatisfactory with a pass rate of 41.13%. Passes in Integrated science, as well declined.

Nedd however, pointed out that the decline in mathematics is not only seen in Guyana, but throughout the Caribbean. Notwithstanding this, Nedd noted that recommendations coming out of the ongoing Commission of Inquiry into the state of the education sector will be able to improve the pass rate for mathematics and other subject areas, next year.

A total of 12,809 candidates from Guyana wrote the CSEC examinations, with 4,540 of that number attending private schools.  Thirty-five (35) different subjects were written with 73,303 subject entries.

There was also a slight decrease in the overall pass rate from 87.54% to 86.74% for the Caribbean Advanced Proficiency Examination (CAPE). For the first time, two new CAPE subjects were written; Integrated Mathematics and Logistics and Supply Chain Operations which saw a pass rate of 52.51% and 100% respectively.

A total of 898 students wrote the CAPE examinations with 4,062 subject entries.

46  candidates secured 11 Grades Ones or more at CSEC. These candidates are    listed below: