On Thursday, February 13, 2020, Ambassador Riyad Insanally signed an Agreement between the Government of the Cooperative Republic of Guyana and the General Secretariat of the Organization of American States, regarding the Privileges and Immunities that will be enjoyed by the Members of the OAS Electoral Observation Mission (EOM) for the General and Regional Elections on March 2, 2020 in Guyana. 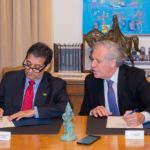 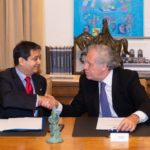 In expressing the Government’s appreciation to the OAS for accepting the invitation to observe these Elections, he gave the assurance that the Government of Guyana and the Guyana Elections Commission (GECOM) are committed to ensuring that the elections are free, fair, transparent and credible.

OAS Secretary General Luis Almagro pledged the full support of the OAS General Secretariat for the electoral process in Guyana and announced that former Jamaican Prime Minister Bruce Golding would head the EOM.

Permanent Mission of Guyana to the OAS Washington, DC