─ new equipment will transform the judicial system in Guyana

─ “we have to advance and embrace change” – Justice Cummings-Edwards

The Judiciary of Guyana, today, received 10 digital court recording units from the Government of Canada and the Judicial Reform and Institution Strengthening (JURIST) Project.

Justice Cummings-Edwards, Chancellor of the Judiciary of Guyana (ag), explained that “we have started the transitioning to the digital recording of proceedings in our court. And the JURIST Project has donated time and resources to that process and to this end they have donated 10 recording units to the supreme court and we expect some 35 more to come.” She added that training began in November 2018, and during that period “we encountered minor teething issues which were rectified.” 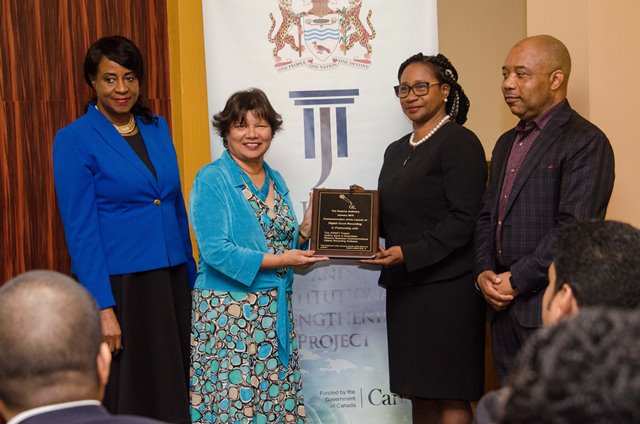 Project Director of Jurist Project Gloria Richards-Johnson and Canada’s High Commissioner to Guyana Lilian Chatterjee handing over a plaque to Chancellor of the Judiciary (ag) Yonette Cummings – Edwards. Also, in the photo CEO of Collins Ijoma and Associates, Collins Ijoma.

During her remarks, at the Pegasus Hotel Guyana, Justice Cummings-Edwards thanked the stakeholders for the recording equipment highlighting that this will make the works of the courts more efficient and less time-consuming.

The Chancellor said that “we have to advance and embrace change. This equipment will transform the judicial system in Guyana.” She said it is her hope that all courts will be soon outfitted with such equipment.

High Commissioner of Canada to Guyana, H.E. Lilian Chatterjee related that Canada is proud to partner with the JURIST Project to aid Guyana’s Judicial system. She echoed the Chancellor’s words noting that the support system in place now, will lead to more efficiency in the courts.

Chatterjee also pointed out that the units will assist in cases being resolved in a timely manner which will, in turn, improve public confidence in the justice system.

Project Director of Jurist Project, Gloria Richard-Johnson explained that the JURIST Project is a regional judicial reform initiative funded by the Government of Canada.  She noted that the ultimate goal of the project is to establish a judicial system that is more responsive to the needs of women, men, youth and the poor.

The JURIST Project commenced activities on April 1, 2014, and is working with judiciaries in the Caribbean region to support their own efforts to improve court administration and strengthen the ability of the courts and the judiciary to resolve cases efficiently and fairly.