Rice is the staple food for more than half the world’s population. It contributes to food security and the health of our nation, and in spite of many commercial options, scores still rely on agriculture and specifically rice for their income.

On Thursday, the Guyana Rice Development Board (GRDB) once again hosted its ‘Open Day’ at the Rice Research Station, in Mahaicony, Berbice. 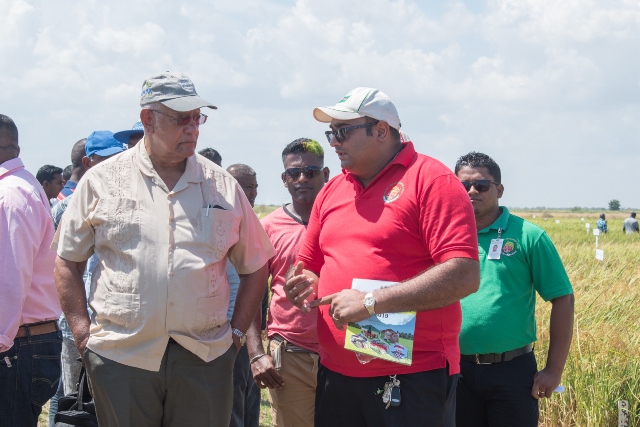 Minister of Agriculture, Hon. Noel Holder pays keen attention as one of the researchers demonstrates. 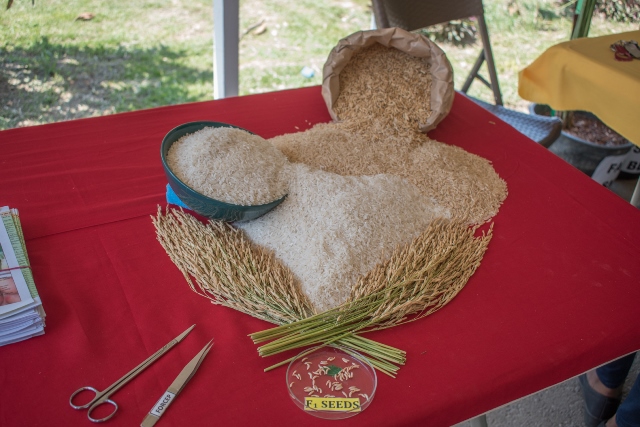 Students being toured by one of the researchers, during the ‘open day’ exercise, on Thursday.

Established in 1994 by an act of Parliament, the GRDB seeks to develop the rice industry and to promote the expansion of the export trade in the said industry. GRDB also establishes facilities to conduct researches relating to rice and extending to rice through an established system, the benefits derived from those researches.

During his remarks, Chairman of the Board of Directors, Claude Housty, underscored that rice research is the avenue through which new technology was made available to the rice sector on a continuous basis to sustain its competitiveness.

General Manager of GRDB, Nizam Hassan, while addressing the gathering, said the board has established offices in Regions 2, 3 and 5, which also provides services to Regions 4, 5 6 and 9. He said research has been conducted in plant Breeding, Agronomy, Entomology, Pathology and Post-Harvest and value addition. He noted that all the services provided by GRDB are aimed towards further developing the rice industry.

According to Hassan, among its plans for the sector, the GRDB is working to implement a project titled “Strengthening the rice production monitoring system in Guyana and investigating value-chain opportunities.” The two-year initiative, he noted, will be an effort by the Government of Guyana (GoG) and Food and Agriculture Organization (FAO). The project is expected to design, upgrade and digitise the system and methodology to monitor rice production throughout Guyana and to implement a value-chain assessment to the rice sector.

In his keynote address, Minister of Agriculture, Hon. Noel Holder highlighted that the average rice yields have constantly been growing in Guyana. According to the Agri-Minister, such achievement in the sector remarkably demonstrates the government’s dedication.

“It is due to the government’s commitment to the overall expansion of the industry and specifically to our investments in research and development. The improved agronomic practices for rice cultivation being transferred to farmers by the extension programme that works closely with the researchers are also contributing factors.”

Minister Holder added too that some $372M is expended annually by the Guyana Rice Development’s Board to execute initiatives at the Rice Research Station.

Before the formal ceremony, the Minister of Agriculture, dignitaries from government agencies and the private sector, along with students, were privileged to tour some of the testing fields at the station to see the works being done by the researchers.