“Guyana is keen on strengthening its cooperation on the political, economic and commercial front in areas of preservation of the environment, energy, agro-processing, scholarship offers and trade and investment,” Minister Greenidge said.

Guyana and Indonesia established formal diplomatic relations on 27 August 1999 and have collaborated in international fora such as the Non-Aligned Movement, the G-77 and China, and the United Nations, among other areas.

During the meeting, Minister Greenidge also used the opportunity to express condolences, on behalf of the Government of Guyana, on the loss of lives in recent terrorist attacks in Indonesia. “Terrorism is a problem that affects everyone, thus there is an urgent need to strengthen international cooperation among states to fight against transnational organized crimes,” he stressed. 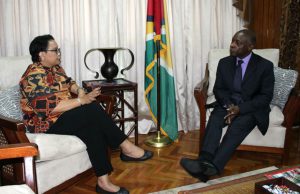