The Hague Conference being hosted by Guyana, in collaboration with the United Nations Children’s Fund (UNICEF) sets the foundation for Caribbean member states to work towards establishing laws that can be applied in relation to family law matters.

The three-day regional conference being hosted at the Pegasus Hotel, will address the Hague Conventions on child adoption, abduction, maintenance and international family mediation.

For Guyana and the wider Caribbean region, information coming out of the Hague Conference will provide members states of the Caribbean Community (CARICOM) greater familiarity with these international standards of practice.

More importantly, the conference provides the basis for developing a framework within the region to address family law issues such as child adoption and abduction, as well as cross-border trade. 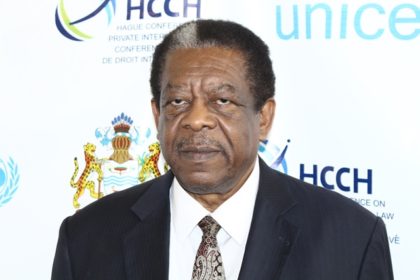 President of the Caribbean Court of Justice (CCJ) Sir Dennis Byron, who is present for the conference, believes that the increased knowledge and understanding garnered from the conference will see more “community laws” being developed.

“We at the CCJ are very interested in the increased appreciation of family law in the region, both in terms of helping to support the work of the regional jurisdiction, and the development of the single market and economy, but also in terms of supporting general traditional development by making certain that the international standards which are evident in regional treaties are more applicable in the way regional courts operate,” Sir Byron told the Government Information Agency (GINA) in an interview just before the opening of the conference this evening.

The sensitisation of persons on the awareness that will be raised is important and assists the region “to make it become more real to the way how we do our business and so on,” Sir Byron said.

Noting that he was pleased to be in Guyana for this meeting, the CCJ President said, “I really expect that the convention itself will be inspiring to the judiciary and legal profession and general public here.”

Meanwhile, Byron expressed the hope that this conference will stimulate interest by participating countries to sign onto the Hague’s Conventions where they can benefit from an international network of judges. “Obviously being part of a judicial network has its benefits and it could very well be that as a result of the activities of this week, it will stimulate and encourage greater participation among regions,” Sir Byron noted.