Minister of Public Health, Volda Lawrence has confirmed that the Ministry of Public Health has terminated the rental agreement for the Sussex Street bond which has cost the ministry millions of dollars. 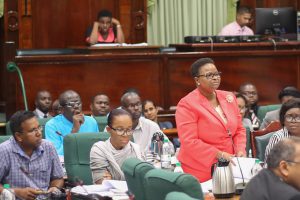 The agreement was entered into with Linden Holdings Incorporated from the month of July 2016 and has been a point of controversy for the parliamentary opposition.

The Public Health Minister has reassured that as of December 31, 2018, the ministry will generally cease the rental of bonds for the storage of drugs, medical supplies among other critical items used in the public health sector.

Budgetary allocations have been provided for in 2019 for the completion of bonds at Kingston and Diamond. These state-of-the-art facilities are expected to be bigger and more conducive for the storage of medical drugs and supplies. In the meantime, the ministry will utilise temporary holding facilities for storage.