Guyanese of different ethnicities and religious background flocked the Heritage Village at the Sophia Exhibition Centre to witness the official launch of the Indigenous Heritage Month 2017. This year’s observance is being celebrated under the theme “Guyana’s first peoples-Sustaining a rich cultural environment.” 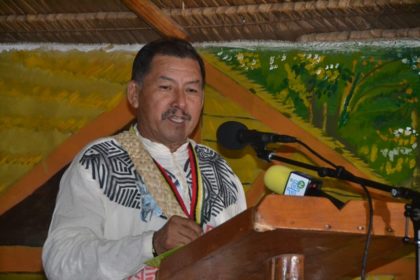 Minister of Indigenous Peoples’ Affairs, Sydney Allicock during his address at the ceremonial Indigenous Heritage Launch at the Sophia Heritage Village.

Among those attending the event were, First Lady Sandra Granger, Minister of Indigenous Peoples Affairs, Sydney Allicock and Minister within in the Ministry, Valerie Garrido-Lowe, Ministers within the Ministries of Finance, Jaipaul Sharma and Education, George Norton and Minister of Public Affairs, Dawn Hastings-Williams, Chairman of the National Toshaos Council (NTC) Joel Fredericks, members of the diplomatic corps and representatives of the various indigenous organisations.

Minister Allicock, during his featured address noted that this year’s theme is timely, as it is in keeping with the government’s approach of a green economy.

He said that the indigenous peoples have learned from their fore bearers, the value of adherence to the virtues of nature; the people have learned that living as one with nature is the most important lesson if they are to survive, be comfortable with themselves and others, while providing a universal guarantee that the natural environment remains intact for posterity.

The younger generations, Allicock said must seek out with enthusiasm those older, wiser ones from their midst and make maximum use of their wisdom and teachings. He urged them to use the products of the electronic age to record, for those to follow, the practices, that will help them to realise the true meaning of this year’s heritage theme.

Just like the indigenous peoples, who have been living the ‘green way’ Minister Allicock emphasised that every Guyanese has role “in bringing to life the culturally valuable teachings which can serve not only to inspire, but also to realise the green economy.” He noted that Guyanese must be proud to celebrate and tell the world with great pride that the rainforest of Guyana is an invaluable resource which supports life.

The Minister said Guyanese must be proud that Guyana is a signatory to the Paris Agreement, “Such is our 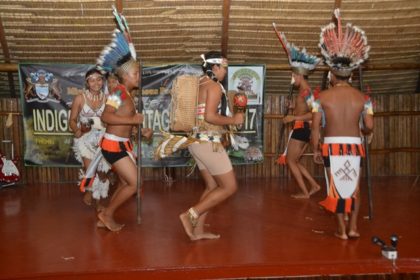 On the issue of land, Minister Allicock said “to those who suggest that the Presidential Commission of Inquiry into land matters will divide us, are dead wrong.” Government, he said is however committed to resolving such issues.

He urged the people to utilise the forest, lands and other resources in a responsible manner, so as not to lose sight of who we are as a people.

Minister Valerie Garrido-Lowe, remarked that as the indigenous people celebrate this auspicious annual celebration, they must reflect on how far they have come and where they hope to go in the future.

Speaking of the unique culture of the indigenous people, she noted that the people have much to share with the rest of Guyana, especially regarding the natural environment and the ecosystem.

The Minister addressed the need for the people to work together for the betterment of their communities and by extension the country.

Meanwhile, NTC chairman, Joel Fredericks mentioned that the history of Guyana’s first people is a great testimony to the world and Guyanese must be proud of that. “ if you look at the theme, it says sustaining, and our ancestors have been sustaining the rich green forest we have today, “he said.

Fredericks said that the Indigenous peoples have a major role to play in the ‘green economy’ agenda and so, it is very important that the land issues that have been pending for decades, is resolved in a timely manner.

Those attending the launch were  entertained with dances and songs from various indigenous cultural groups and the students at the Amerindian Dormitory facility.

The celebration continues at the Heritage Village, with a cultural extravaganza from September 01 to 05; dances, songs, food, craft, and an art exhibition will be on display. Also scheduled is the heritage pageant, sports, a fund-raising event and Reflections on the Life of Stephen Campbell.

The National Heritage Village is Pakuri Village – St Cuthbert’s Mission on will host its village events on September 09.