HEYS is not a political programme, it caters for all young people – Prime Minister

Prime Minister Moses Nagamootoo told the Indigenous youths of Mabaruma, that the Hinterland Employment Youth Services (HEYS) programme is not a political programme. He further reassured them that they will not be used to do political work.

“We are not asking you to wear red shirt and run around trying to take over the work of the regional councillors or trying to replace the toshaos and councillors in doing their work. We are not trying to politicize you; we are trying to give you learning and relevant skills for life,” the Prime Minister stated. He further stated, “We are starting with 2000 but we intend to go to 3000 and those with specials skills would be sent to places like the Guyana School of Agriculture, the Kuru Kuru Cooperative college, the Critchlow Labour College or even the University of Guyana once you have shown the aptitude and interest that you want to learn and go forward. The programme caters for all young people of talent.” 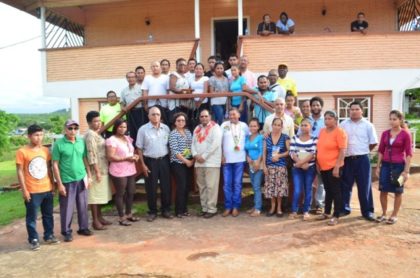 Minister in the Ministry of Indigenous Peoples’ Affairs Valerie Garrido Lowe, responsible for the implementation of the programme, explained that HEYS is a programme with a difference, aimed at building capacity of the Indigenous youth. “It is a long time now that our indigenous communities have been waiting for this programme to come on board. I apologise for the delay but we have started now so when you go back, the energy you gained, the knowledge you have gained you have to impart that to your youths,” Minister Lowe stressed.

It was explained that the Hinterland Employment Youth Service Programme utilises an integrated and user-friendly approach to learning, which seeks to give youth and young adults a second chance to maximize their full potential economically and socially. On-site delivery of the programme will utilise adult methodologies, providing short term, and long term benefits.

The HEYS Programme is the fulfillment of a commitment to the indigenous youths, made by the Government to positively contribute to improving the lifestyle and standards of living for youth and young adults residing in the hinterland with an academic or non-academic need, irrespective of race, gender, religion or political persuasion.