A team led by Public Telecommunications Minister, Cathy Hughes, is on the way to China for talks with the principals of Huawei Technologies Co. Ltd., the entity that constructed the US$32M E-Government network in coastal Guyana.

This network consists of a fibre optic system in Georgetown, and a 4G LTE (Long Term Evolution) network that extends from Skeldon, Berbice to Charity, Essequibo Coast. 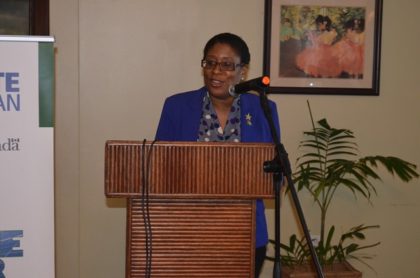 This is the system that the Government of Guyana is currently utilising to provide internet access to schools and governmental agencies along the coastal plain.  The inter-connectivity programme is progressing well, and the ultimate objective is to have every single public entity connected to the national network.

Huawei is a Chinese multinational networking and telecommunications equipment and services company headquartered in Shenzhen, Guangdong Province, China.  It is reputed to be the largest telecommunications equipment manufacturer in the world, having overtaken Ericsson in 2012, and it was this company that constructed the national ICT networks in Trinidad and Tobago, the Dominican Republic, Suriname and Panama.

Minister Hughes and the telecommunications team will meet with Huawei’s principals at their Shenzhen headquarters, and their factories and installations in Beijing and Shanghai.  The main objectives are to secure the long-term viability of Guyana’s telecommunication networks, and to acquire technical assistance and training capacity.  The latter is to push forward the GoG’s plan to expand the ICT networks into all unserved areas including Bartica, Linden, Kwakwani, Port Kaituma, Mabaruma, Annai and Lethem.

According to Head of the E-Government Unit, Floyd Levi, the unavailability of the severely damaged fibre optic cable is the reason for the expansion initiative.  This cable was supposed to have been laid subterraneously along the Linden to Lethem corridor, and it should have had the capacity to provide internet services to all hinterland communities in most administrative regions.  The newly crafted ICT expansion programme is the best alternative.

In the meantime, with the creation of competent technical skills being so integral to the entire national programme, Huawei will be asked to facilitate in-country training of no less than 50 ICT engineers in the immediate term.  Only four ICT engineers had received adequate training under the previous administration.