Hinterland electrification projects in 2016 improved lives of many

The Hinterland Electrification Company Inc. (HECI) for the year 2016 was able to make the lives of those living in the hinterland a bit more comfortable. The company was allocated the sum of$110.9M of which $109M was used.

Chief Electrification Officer, Horace Williams during a Ministry of Public Infrastructure’s year in review (2016) press conference today, said that most of the projects that were set to be carried out in 2016 were completed. 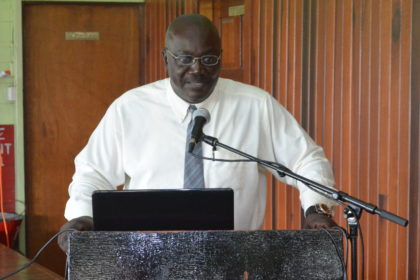 Williams pointed out that the budget for 2016 was revised, due to the fact that the inclusion of two programmes could not be completed within the year as they were foreign funded ones.

Williams said a 6.2 KW Photovoltaic System was installed at the St. Cuthbert’s Mission Secondary School, Region Four and the upgrading of a generator at Port Kaituma, Region One.

Aside from the locally funded programmes, there were a number of programmes that were funded by the Inter-American Development Bank (IDB). According to Williams, only a small number of the projects funded by the bank were completed. He said the remainder will be completed in 2017.

Even with the success the electrification company enjoyed in 2016, the year was not without challenges. Williams pointed out that there was slow implementation of contract activities by contractors, delays in getting ‘no objection’ from the National Procurement and Tender Administration Board (NPTAB) and poor responses by contractors to invitations to bid among others.

The work plan for 2017 will see the HECI thrusting towards the government’s drive for a ‘Green Economy’ with a number of green energy projects.

The locally funded projects for 2017 include:

Foreign Funded Projects for 2017 include:

According to the Williams, the public awareness campaigns will “give awareness to the population of the benefits of using renewable energy and how to implement energy efficient measures.”