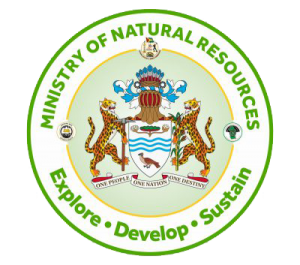 The European Union Forest Law, Enforcement, Governance and Trade (EU-FLEGT) Voluntary Partnership Agreement (VPA) was initialled at a special ceremony at Berlaymont Hall in Brussels, Belgium on November 23rd, 2018, and followed by a reception for participants and special invitees.

The initialling was done by Minister of Natural Resources Hon. Raphael G.C Trotman on behalf of the Co-operative Republic of Guyana, and Directorate-General for International Cooperation and Development (DG DEVCO) Deputy Director-General Marjeta Jager on behalf of the European Union before a packed hall of special invitees.

This agreement is held as historic and now sets an example for the Caribbean Region as the first VPA in a Caribbean country. It also paves the way for future agreements to be signed with neighbouring countries.

The VPA enables the forestry sector to continue to contribute to the national green economy while maintaining low deforestation rates and most importantly safeguard Guyana’s unique patrimony for future generations to come.

At the ceremony, the EU commended Guyana for the best practices shown throughout the lengthy process and for the remarkable commitment and work that has been done.

The VPA is a bilateral trade agreement and is a component of the FLEGT initiative which aims to curb illegal logging and facilitate legal timber trade between the European Union and its partners. Experience from other countries which have implemented the VPA shows of the many positive environmental, social and economic impacts particularly, improved forest governance, sustainable trade, legal and regulatory frameworks, improved peace and security, addressing of climate change and tourist conservation of biodiversity.

Seeing that there is a strong interest in the FLEGT license in several countries, the VPA for Guyana will contribute to improving the competitiveness of the timber industry’s public and private sector and expand trade into a large European market. 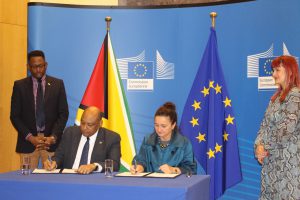 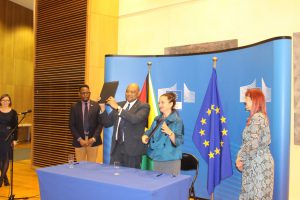 The parties have a photo moment with the initialled VPA 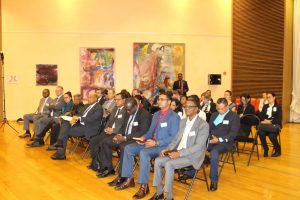 Those in attendance at the ceremony 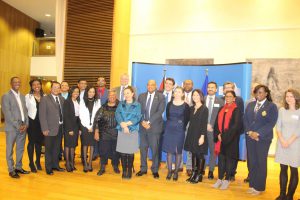 The Guyana delegation among representatives of the EU 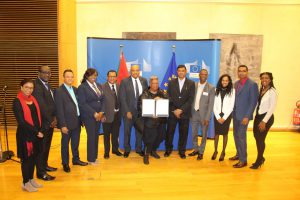 Members of the Guyana delegation present at the signing

During the VPA negotiation phase, Guyana has reached noteworthy milestones in terms of national legal framework, seeing Guyana finalizing various policy and legislative reforms, which include the revised Forestry By-laws and accompanying 2018 National Forest Policy Statement, and 2018 National Forest Plan. Guyana was lauded for these achievements during the signing ceremony.

Also, during same negotiations, there has been great inter-institutional coordination as well as notable stakeholder engagement that displayed a high level of inclusiveness which would play an excellent example for the implementation phase which will commence shortly. The key to making all benefits of the VPA a reality now lies in the implementation of it which would require the strong commitment of all stakeholders.

The EU maintained its commitment to continue supporting Guyana in implementing the agreement and are also willing to assist with necessary technical assistance in moving forward.

Guyana now heads to the implementation stage and joins six countries; Cameroon, Central African Republic, Ghana, Indonesia, Liberia, and Republic of the Congo that have FGEGT agreements with the EU. In this implementation phase, all gaps identified during the field-testing exercise in July 2017 will be addressed to strengthen the entire system see the eventual issuance of FLEGT Licenses.

For the implementation phase, the establishment of support structures to develop the road-map plan for the implementation phase is the first item on the agenda upon return to Guyana. There will first be the formation of the National Implementation Working Group (NIWG), which will be done through a very transparent and open process where all stakeholders would be invited to choose the members of the NIWG. Additionally, it is planned to have all government agencies and ministries involved to establish a Governance Coordination Body. There will also be the creation of the Joint Monitoring and Review Committee with representation from both Guyana and the EU.

The Ministry of Natural Resources and the Guyana Forestry Commission look forward to the greater cooperation and engagement between Guyana and the European Union on the now initialled VPA.