House approves supplementary provisions in excess of $3B

The National Assembly last evening approved Financial Paper Number One, which dealt with the contingency fund advances on the Current and Capital Estimates totalling $931,018,292. That total dealt with expenses covering the period January 1 to July 28.

Financial Paper Number Two which was essentially a Supplementary Provision on the Current and Capital Estimates totalled $2,089,699,085 and was also approved.

Financial Paper One outlines under regional and clinical services, a sum of $63.5M to facilitate rental to New Guyana Pharmaceutical Corporation (GPC) for the storage of pharmaceuticals for the period March to June 2016, as well as payment of rental to Linden Holding Company for July 2016.

Responding to questions from Opposition members, Public Health Minister, Dr. George Norton explained that a cabinet decision was issued in the month of July 2016, approving a security deposit of $25M to be paid to the Linden Holding Company, under which a contract is in effect. 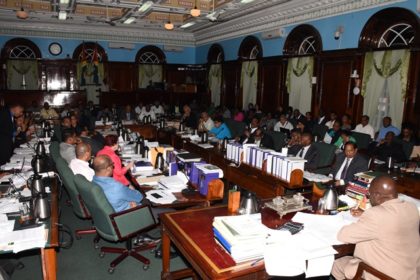 For the Ministry of Agriculture the sum of $306,716,110 was approved. The amount approved represented a sum of $234,716,110 as provision for expenditure associated with the National Drainage and Irrigation Authority (NDIA) un-budgeted expenditures related to the prolonged dry season, El Nino which affected several regions across the country and the sum of $72,000,000 for the Mahaica Mahaicony Abary Agricultural Development Authority (MMA/ADA) $42,777,905 and the Guyana Livestock Development Authority (GLDA) $29,222,095.

Following extensive debate and examination of the supplementary provisions proposed by the Ministry of Legal Affairs in the Committee of Supply last evening, the House approved $17,900,000 for payment as contribution towards increased tuition fees for Guyanese law students attending the Hugh Wooding Law School for the academic year 2016-2018.

This contribution represents 25 percent of the economic costs of tuition fees for 50 students.

Defending the money requested, the Attorney General told the Committee of Supply that the cost for one student, per year, at the Hugh Wooding Law School, is about $2.83M but with Government’s intervention that cost will be minimised, and the students will now pay about $2.47M each.

The sum of $655,000 was allocated for the payment of supplies. These include life vests, whistles, bag packs, compasses and other essentials to equip teams on completion of Community Response Team Training. The sum of $500,000 was requested and approved for the procurement of office materials and supplies needed for the preparation of reports and updating maps.

For the maintenance of four trucks and six other vehicles which include three 4×4 pickups, a mini bus and two SUVs, the sum of $1.4M was approved. Telephone charges at the Alternate National Emergency Operation Centre (NEOC) will be covered at the cost of $504,000.

An amount of $4.3M was approved for the presence of three security guards to be stationed at the NEOC while $5.3M was cleared for meals for personnel attached to the NEOC, working 12-hour shifts on weekends

The approval of the sum of $406M was also sought after it was used to facilitate the completion of the Durban Park Development Project which was the venue for the hosting of the grand 50th independence anniversary celebrations.

Minister of Public Infrastructure, David Patterson told the House that he was happy his Ministry was able to complete the project in time for the celebrations. He then advised that the Durban Park project will soon be handed over to the Ministry of Communities.

Meanwhile, the Ministry of Public Telecommunications which was recently established has been provided with a sum of $519, 233, 184 to fund and strengthen its E-Government Unit. The money will be used for operational expenses among others.

Under telephone service, $88,776,000 was approved to cater for internet and satellite services in hinterland communities.

After hours of scrutinising the supplementary provisions made, the Financial Papers received the approval of the House.