Braving the scorching afternoon sun, hundreds of spectators converged upon D’urban Park to revel in the Mashramani 2019 celebration.

Though there was a slight delay when the floats entered the park, visitors and Guyanese alike decked in their broad hats and umbrellas remained committed to viewing the spectacular government and private sector floats on display. Nearly all expressed shared the common view that the holiday speaks to Guyanese unity and patriotism.

A section of spectators heading to D’urban Park.

The Ministry of Indigenous Peoples’ Affairs on full display.

A section of The Chinese Association of Guyana revellers.

The Department of Public Information took to the packed stands to get an insight into the opinions of the people on the scene. Kelisie Joseph said that “Mash is all about the culture, the history of Guyana, everybody coming together partying as one”. She noted colourful floats adding “I love the way they organised the floats because each group had the individual colour of the flag”. She capped off her praises stating that “I like that they only played Guyanese music.”

Even senior citizens decked in their patriotic colours were spotted throughout the stands. Norma Wartman defied the weather stating “I’ve been here since 8 o’clock and [I am] enjoying every bit of it.”

Former Mayor of Lethem, Carlton Beckles praised the Mashramani celebrations, noting that he was impressed with both the quality of presentations and turnout of people at D’urban Park. On the meaning of Mashramani, the former Mayor said “it is our 49th anniversary as a republic and prior to 2015, it [Mashramani] has been very dormant. It is a revitalisation […] it’s an achievement as a nation”.

The Guyana Police Force descended on D’urban Park to the surprise of many. It is the first time the GPF would have participated in the Mashramani activities. The 170- strong band comprised of both youths and adults proudly showcased their costumes to the sounds of a local soca. Under the theme “Improving Police Community Relations for a Better Nation” spectacular floats depicted the values of GPF, its top brass of leadership and the successful Sophia Community Policing programme. They culminated their performance with satisfying sounds from the GPF Steel Pan Band.

This year’s Republic Day is being celebrated under the theme “Celebrate Mash 49 with Victory in Mind”. 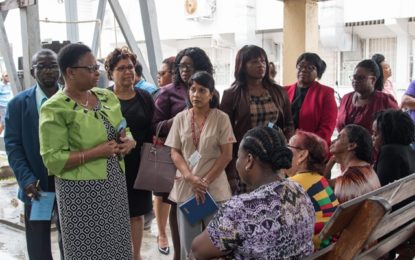