Twenty-four students drawn from nursery and primary levels of Hururu Mission, Berbice River received lifejackets from the Maritime Administration Department (MARAD). The donation of the lifejackets is part of MARAD’s countrywide program to ensure students who use the river to get to school can do so safely.

MARAD’s Public Relations Officer, Akosua Mc Pherson, said it is a challenge to ensure that children use the lifejackets. 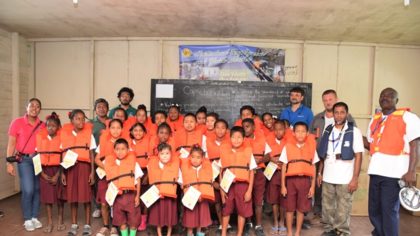 Nursery and Primary students who received lifejackets from the Maritime Administration Department, also in the photo are representatives of Oldendorff Carriers

“We want to bring the safety aspect to you and let you know that wearing a life jacket is very important (when) traversing the river…we’re pleading with you to wear your life jackets whenever you go into the boat” Mc Pherson said.

Apart from the students receiving lifejackets, commuters who had gathered at the  Skills Training Centre in the community, were trained in the best practices to be employed when traversing the Berbice River.

Representatives from the Oldendorff Carriers explained to residents that in negotiating blind turns along the River, the Company’s vessels sound their horns to notify approaching vessels of their presence.

Residents were also cautioned against the dangerous practice of cutting across the path of  Oldendorff  Barge vessels. It was explained that the vessels cannot immediately stop in the waters. This practice can cause accidents which would be dangerous for residents of the community.

Residents also received sports equipment from  Oldendorff Carriers, which collaborated with the Maritime Administration to make the training and lifejacket distribution a reality.