Georgetown, Guyana – (August 18, 2016) Members of the Indian Action Committee (IAC), today, called on President David Granger to inform him of a project that they are currently working on to augment the Government’s efforts towards fostering social cohesion in the Guyanese society. The meeting was held at the Ministry of the Presidency. 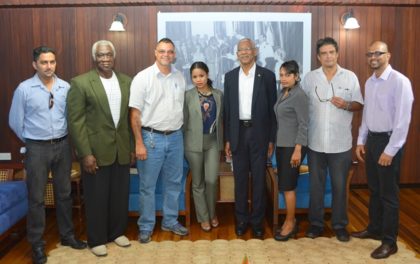 The Committee is currently working on a stage production called “I AM US”, which is slated for the National Cultural Centre (NCC) in the first week of October. Mr. Naughton explained that the play, which will also be taken to other regions across Guyana, seeks to address age-old issues that prevent Guyanese from different ethnic groups from fully understanding and trusting each other.

Mr. Evan Persaud, an executive member of the Committee, explained that they are hoping to open the play to the Guyanese public free of cost.  In response, President Granger assured that his Government is supportive of any group or programme that can contribute to the fostering of social cohesion and national unity.

The IAC, formerly known as the Indian Arrival Committee is a non-profit, non-governmental organisation, which was established in 2003 and has as its primary objective, the promotion and preservation of the culture and traditions brought by Indian Indentured Labourers in 1838.