The increased police presence around the Stabroek Market area which was initiated earlier this month has already begun to have a positive impact on the crime rate. Over 30 police officers are now stationed around the market area on a daily basis.

The enhanced police presence around the Stabroek Market area was due to the constant reports by vendors about the increasing rates of criminal activity in the area.

The Stabroek Market Square is populated with vendors and public transportation service providers and is known for being a “hotspot” for criminal activity. 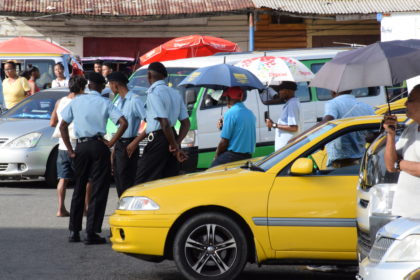 The Government Information Agency (GINA) visited the Stabroek area and spoke to a few vendors who lauded the move by the Guyana Police Force (GPF). They said this initiative has already impacted positively on the crime situation.

David, a vendor said, “To be honest with you, the police presence out here is good. That is something good the commissioner has done, it ease down a lot of crime, you know men does snatch people thing, pick people pocket, you do not see that out here now because police too much… and that is very good, especially for us businessmen, at least the people would not be scared to come and buy,” the vendor explained.

Thomas, another vendor pointed out that, “The police doing a good job so far up to now… And I glad for that and they keep away the boys from the market who liming and who does sell them lil drugs and them thing so the police keeping them away from the market.”

Commander of ‘A’ Division Clifton Hicken confirmed that the presence of the police has impacted on the criminal activities that usually occur around the Stabroek area. However, the commander noted that the Division is keeping an eye out for ballooning effects.

Only recently, the Commander pointed out that two arrests were made on Main Street, Georgetown after the perpetrators were intercepted. According to Commander Hicken, the men once dwelled around the Stabroek market area.

“We can say that we have had a drastic decrease in all levels of crime in the market because of our posture, but we are still looking for evidence for ballooning effect having prevented them from going on the market, they are looking for other opportunities,”” the Commander explained.

Hicken reiterated that the GPF is not working in isolation and called on members of the public to continue cooperating, to help eradicate crime. Persons who see any suspicious activities are being asked to contact the nearest police rank or station.