Individuals, organisations awarded for promoting safety at the workplace

Individuals, companies, and organisations were today, recognised for the significant role they play in promoting Occupational Safety and Health (OSH) measures at their workplaces. 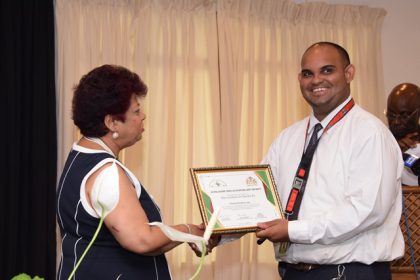 A representative from the Puran Brothers Waste Disposal Inc. receiving his award from Minister of Social Protection, Amna Ally.

In her feature address, Minister Ally noted that for Guyana to achieve the economic benefits derived from a safe working environment, a more comprehensive knowledge-based approach must be implemented, at the enterprise, industry and national levels.

The minister further noted that while significant progress has been made to protect workers’ rights, the administration is cognisant that more needs to be done. It is for this reason, emphasis has been placed on hosting a number of OSH activities across the country with an emphasis on the young population.

“Studies have shown that young workers have significantly higher rates of occupational injury than adult workers. Therefore, improving the safety and health of young workers will, without a doubt, help to contribute the achievement of the Sustainable Development Goal Eight. This will promote sustained, inclusive and sustainable economic growth, full and productive employment and decent work for all,” Minister Ally remarked. 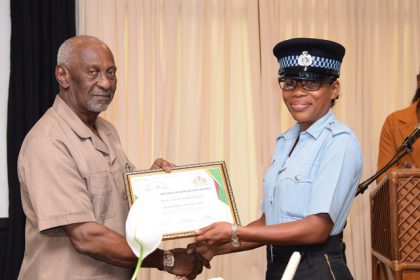 A representative from the Guyana Police Force (GPF) receiving her award from Minister within the Ministry of Social Protection, Keith Scott.

This will assist Guyana in attaining a target of 8.8 on safe and secure working environment for all workers by 2030, and a target of 8.7 on ending all forms of child labour by 2025. However, achieving these targets requires public authorities, employers, workers, trade unions and other key stakeholders to collaborate and engage the young people, so as to create a culture on prevention that focuses on the safety and health of the next generation of the nation’s workforce.

Minister Ally also reaffirmed the government’s commitment to working along with its strategic partners to improve the safety and health of all workers through a system of defined rights, responsibilities and duties, and to give the highest priority to the principle of prevention, promote an atmosphere of respect at all levels.

NACOSH’s Vice-Chairperson, Patricia Woolford said the objective of the awards is to encourage all companies to lift their environmental standards and improve their working conditions.

Meanwhile, GTUC’s Lincoln Lewis commended NACOSH for annually recognising those who have contributed to the preservation of OSH measures.