The government is collaborating with the International Organisation for Migration (IOM) to strengthen the country’s capacity to effectively combat trafficking in persons and assist victims of trafficking.

At the official launch of the project on Monday at the Cara Lodge Hotel, Minister of Security Khemraj Ramjattan noted the project continues the work of the National TIP Action Plan which was launched earlier this year. 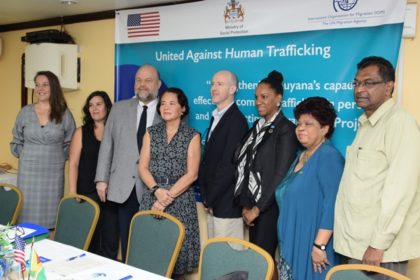 The three-year project will see workshops and consultations being conducted to develop standard operating procedures for victim-centered investigation, prosecution, identification and protection of victims of trafficking.

“It is an important step in the implementation of the overall project and a key intervention which will help to guide local stakeholders in the execution of their duties and avoid grey areas…regarding their respective roles and responsibilities.”

The SOPs are also important if Guyana is to maintain its tier one ranking on the US State Department’s Trafficking in Persons Report, Minister Ramjattan stated.

Minister of Social Protection Amna Ally pointed out that the SOPs will be instrumental in the protection of children.  “The standard operating procedure will act as a guide for all stakeholders and relevant persons responsible for combating human trafficking in Guyana, with an emphasis on child trafficking as well as improve their efficiency to protect victims of human trafficking within our country.”

First Lady Sandra Granger, who is a strong anti-TIP advocate applauded the efforts of the government to protect its citizens against trafficking crimes. “It is, therefore, in my view, imperative that comprehensive standard operating procedures be developed, widely publicised and implemented so that we in Guyana can eliminate the scourge of trafficking in human beings.”

Also commending Guyana for taking action against TIP was US Ambassador Perry Holloway. “The prevalence of human trafficking globally presents an enormous challenge for us all. The Government of Guyana undoubtedly has taken a robust stand against human trafficking, and the standardisation of its operating procedures is a positive step towards facing its challenges.”

The consultations have already begun and are being spearheaded by international consultants, Linda Baca and Lori Mann.  “One of the things that the standard operating procedures are going to be able to provide is a formalised approach to these aspects which mean more formalised reintegration plans and relationships between agencies that can foster more effective collaboration and cooperation,” Mann explained.

The finalised SOPs will be aligned with international standards and best practices and integrated into specialised training courses aimed at building the capacity of police, prosecutors, criminal judges, magistrates, and front-line officials from the Ministries of Social Protection, Public Security, National Resources, Indigenous Peoples’ Affairs and Foreign Affairs among other agencies.