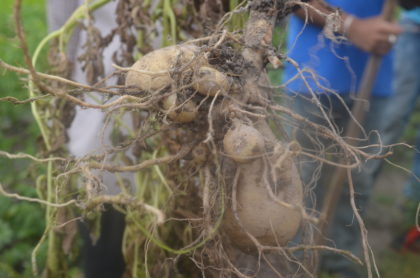 The project is being implemented and funded by the Government of Canada through the Promotion of Regional Opportunities for Produce through Enterprises and Linkages (PROPEL) Project.

The pilot project at Little Biaboo started in the latter part of January and is expected to be harvested at the end of April.

The varieties of potato cultivated are Spunta, Kennebec, Chieftain, Bristol Pride and Shepody, with the Bristol Pride showing excellent yield and growth rate.

On Tuesday, a fertilisation and harvesting practical session was carried out, demonstrating to farmers procedures for caring for the potato crop.

Chief Executive Officer of NAREI, Dr. Oudho Homenauth, said that this is a successful trial of Irish potato cultivation. He noted that a similar project was carried out at Laluni on the Soesdyke-Linedn Highway but, the exercise failed due to flooding.

Dr. Homenauth said that since there are signs of success, it is only a matter of time before similar projects are rolled out in neighbouring 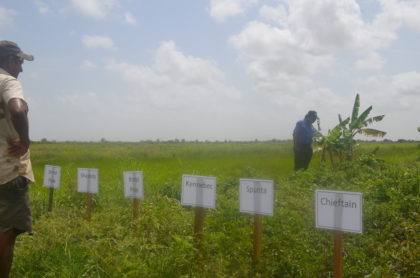 The possibility of successfully cultivating potatoes along the low coastal plain had almost been ruled out given that the region is prone to flooding. The land on which the trial is being conducted has been altered to avoid flooding.

Bhagwan Persaud, the farmer on whose land the pilot project is being facilitated, said that he is interested in expanding the production of the potato crop. The farmer said that potato was never cultivated in the area and could be another major crop coming out of Little Biaboo.

Persaud noted that if he is to expand production, a number of factors must be taken into consideration including allowing enough space for the potatoes develop its full yield. He said conditions such as climate, soil type, irrigation and infrastructure that are favorable for potato production must also be considered.

The objectives of the potato cultivation trials are to identify agro-ecological areas on the coastland of Guyana which are suitable for the production of potatoes, to evaluate the adaptation and performance of the five varieties of potatoes, to determine the growers’ perception of the various varieties grown and to examine consumers’ perception taste and preference.