Georgetown, Guyana – (June 11, 2018) Minister of State, Mr. Joseph Harmon, on Saturday, hosted the first Youth Explosion; an open discussion with youths of Essequibo Islands-West Demerara (Region Three), during which, the participants were able to have their say about the future and development of their region and country and to air issues, grievances, and receive advice on the way forward. The event was held at the Barnwell Event Hall and Hotel.

Youth Explosion, held under the theme ‘Unlocking our minds, releasing our potential’, hosted over 250 youth, hailing from Parika, Karia Karia, Leguan, Patentia and other villages across Region Three. The young people participated in a plenary session and discussed in groups the issues plaguing their communities. At the end of the plenary session, each group selected a spokesperson to present their findings to the Minister and members of the regional administration. 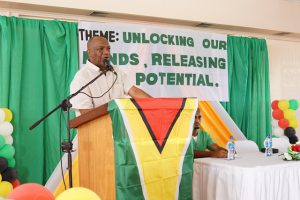 “Today is not a day for me to speak. It is a day when I want to listen to you… You hear my story everyday. You read [it] in the newspapers, [when] you look at the television, [when] you hear me speak… It is time that I hear you speak. This is why we are here today, to unlock… the young minds of our people so that we who are in Central Government, we who are in regional government can listen and hear what it happening in our communities,” Minister Harmon said during the opening ceremony.

Speaking on the President Granger’s mission to provide a ‘good life’ for living in Guyana, Minister Harmon said that the education and empowerment of young people are key to accomplishing that goal. “We want to give you a good life. We want to provide [more] opportunities to young people to be the best they can become. We want to be rich, not merely in material possessions, but… in human values… A ‘good life’ is… a gateway [for] providing young people with opportunities for self-actualisation and self-esteem. Young people must be educated and empowered to be able to grasp these opportunities,” the Minister said.

The youth spared no time when given the opportunity to voice their opinions about the event.

Parika resident, Ms. Geetangli Samlall said the Minister’s visit gives her hope that things in the academic arena will improve. “Having the Minister here today, I feel as if there is a new ray of hope coming… He’s here and he is motivating us. He’s trying to get something from us that he probably can’t get when he’s sitting in his office because we’re so far away… I feel really privileged to be here and I hope that he really does listen to some, if not all of our concerns… The youth need better education system overall because education is key to everything and Guyana is opening up to a lot of things that require education… Make it better. Make the syllabi… more practical, more logical, more useful to us,” she said.

When asking Minister Harmon about the emerging Oil and Gas Sector, Mr. Michael Thomas gained a new understanding of how Guyana’s break into the energy field can benefit the lives of all Guyanese, even those not directly employed within the sector. “[Minister Harmon] opened our eyes on some aspects about oil. I thought that the youth were [only] getting directly involved in oil and gas, but he said there will be a ripple effect. So, [for] the things down the line… for example, we will need [infrastructure]… he’s encouraging us to get our certificates in the different fields at the technical institutes… to be the best at what [we] can, and [we] will be rewarded,” he said.

Karia Karia resident, Miss Debbie Fernandes said that there is a need for counselling services in her village. “One of the things I was telling [the organisers] about [is] counsellors for our youth. Sometimes our youth feel… left out… like nobody cares. Our youth want help from people that could really [make a difference]… I was so excited to meet [Minister Harmon]. I couldn’t even wait for [today] to come,” she said.

In an invited comment, Organiser for Youth Explosion, Ms. Renee Rodrigues said that it is important that the young people have the opportunity to speak for themselves. “A lot of the time we find that even when we’re trying to represent youth, we have the older folks representing them. So, what we want to do is have the young people represent their own interests… In my opinion, I don’t think that the older folks can really represent the youth. There’s a big age disparity and generational gap, so we will have different thoughts and ideas… It’s important for us to hear from the youth themselves,” she said.

Project Officer at the Ministry of Natural Resources and Youth Explosion Organiser, Dr. Astell Collins praised the Minister for initiating a dialogue between the Government and Guyana’s young people. “[We’re] giving young people a new narrative where they are the champions and captains of their destiny. So, I believe [that] this has been a success… This is the first [Youth Explosion] that has the perception that it is not about the Government or any authoritative figure giving solutions… It allows those it caters for to come up with the solution so that they are valued,” he said.