Georgetown, Guyana – (July 7, 2016) President David Granger and Prime Minister Andrew Holness of Jamaica, this afternoon, sat down for bilateral talks at the Pegasus Hotel, to discuss the strengthening of trade relations in the areas of agriculture, manufacturing and tourism and deepened cooperation in defence and security.

Prime Minister Holness, who attended his first Regular Meeting of the Conference of the Heads of Government of the Caribbean Community (CARICOM) investment in Guyana from his country. 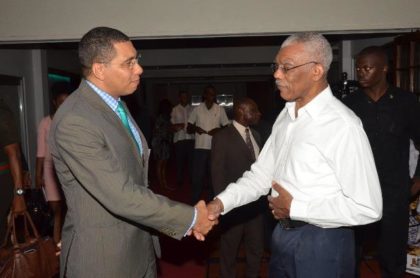 President David Granger and Prime Minister Andrew Holness greeting each other a the Pegasus Hotel this afternoon just before they sat down for bilateral talks.

President Granger welcomed these comments said he looks forward to strengthened relations between Guyana and Jamaica.  The Head of State also said that the two countries, as founding nations of CARICOM, have a role to play in further strengthening the alliance of the regional body.

The two Heads of States, during the meeting, identified a number of possible investment and cooperation areas in agriculture, manufacturing and other sectors and President Granger indicated that he would ask the Minister of Business, Mr. Dominic Gaskin would follow up in that regard.

In addition, even as Guyana moves in the direction of developing its eco-Tourism product, President Granger noted that while this country can add to the diversity of what is offered in that sector in the region, he acknowledged that the industry can benefit from some capacity building with regard to hospitality and tourism management.  Prime Minister Holness noted that Jamaica does have expertise in that regard and indicated a willingness to look at what support can be offered to Guyana.

The two Heads of States also agreed to look for means to deepen and enhance security and defence cooperation in the areas of information sharing, as well as training and capacity building.

The Jamaican Prime Minister, who is departing Guyana tomorrow, thanked President Granger and Guyana for the hospitality he experienced during his stay here.