The Guyana Elections Commission (GECOM) has reported a high voter turnout for the joint services who cast their ballots Friday in the General and Regional Elections.

The commission has reported 8,369 ballots out of an expected 10,226 were cast representing an 88.1 percent turnout overall. 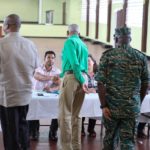 HE President David Granger greets PPP/C observer Charles Ramson Jr. as he observes the process at GDF Base Camp Ayanganna. 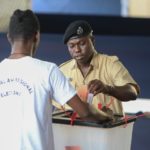 A member of the Guyana Police Force casts his ballot. 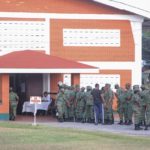 Members of the Guyana Defence Force queuing to cast their ballots at GDF Base Camp Ayanganna. 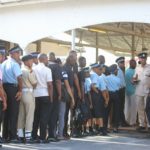 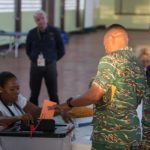 A member of the Guyana Defence Force casts his ballot as an observer from EU Elections Observer Mission looks on.

The Guyana Elections Commission (GECOM) had stated that 60 polling places across the country, would be made available for the service ranks.

On Friday morning After observing polling at several stations yesterday, both His Excellency President David Granger and GECOM Chairman Retired Justice Claudette Singh reported that the process was smooth and without interference.

“The process is smooth; it is proceeding without interruption. I am very satisfied with the turnout and I think the people of Guyana can be assured that the disciplined forces are performing their civic duty. They are not being obstructed by the administration in any way and the administration of the elections commission seems to be functioning efficiently,” the Commander-in-Chief underscored.

The Head of State said he expects a similar process as it relates to the efficiency of the voting process on March 2.

Chief of Staff of the GDF Brigadier Patrick West had said that approximately 3000 soldiers were expected to cast their ballots yesterday, representing a 95 percent turnout.

The remainder he said would vote on March 2.