— Highlight several achievements in their village

Senior Councillor Brian Melville and residents of the South Central Rupununi community of Katu’ur have pledged their support to the Coalition Government, after noting several developments within their communities and region as well. Confidence was also expressed that other projects in the pipeline will be delivered when the government returns to office.

These views were expressed at a fruitful meeting held at the village’s primary school, which was attended by scores of residents and hosted by Minister within the Ministry of Communities, with responsibility for Housing, Hon. Annette Ferguson. 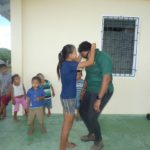 Minister within the Ministry of Communities, with responsibility for Housing, Hon. Annette Ferguson being garland by a child of Katu’ur village. 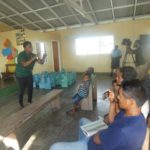 Minister within the Ministry of Communities, with responsibility for Housing, Hon. Annette Ferguson addressing residents of Katu’ur. 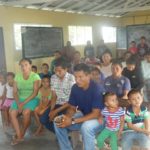 Some of the residents at the community meeting

Some of the achievements outlined by the villagers include the provision of potable water, the school’s feeding programme and the Hinterland Employment Youth Service (HEYS) programme which benefitted several youths in the community.

Minister Ferguson explained that the HEYS programme amongst others, were made possible by the government because it adheres to the principle of empowerment as opposed to giving out handouts.

“For you to become empowered, for you to become educated, it doesn’t make sense to give you the tools and not guide you through the process as to how those tools ought to be used. Many of you are familiar with the quote, ‘you cannot give a man a fish and expect him to know how to fish, you have to teach that man how to fish… that is called empowerment, and that is what your government has been doing,” Minister Ferguson explained.

The residents were also made aware of the achievements of the administration over the last four years, and the significant plans in store for 2020.

In outlining the accomplishments of the Coalition, many of which benefited the Rupununi Region, Minister Ferguson spoke of the $ 5.2Billion plugged into the education sector, which saw significant performance improvement, particularly from students in the hinterland region. One of the major factors for this was the introduction of the Public Education Transportation System (PETS).

This, she described, as the government’s effort to bridge the gap between the hinterland and the coastland.

The other achievements included the increase in the minimum wage and old-age pension, the significant reduction in crime, improvement in the health and infrastructural sector, the decentralisation of several public services and the introduction of regional radio stations.

“My brothers and sisters, if we only have four years as a new government, not 23 years, just four years; but look at the massive infrastructural works, look at the development we have achieved… We will continue to see changes in all sectors, we promise you the good life, and you will get it,” she affirmed.

In this regard, Minister Ferguson urged the residents to ensure the government gets the opportunity to continue along with transformation that has begun under their tenure.

Residents were then given a chance to raise their concerns, which included repairs to primary and headteacher quarters, the construction of access roads and bridges, the regularisation of titled lands and the provision of internet services. Minister Ferguson assured the residents that when the 2020 budget is passed, all of the capital projects requested will be provided.

Relative to the regularisation of land, the minister gave her commitment to personally working along with the Ministry of Indigenous Peoples’ Affairs and the Ministry of the Presidency, to ensure the Katu’ur lands are regularised, so that the community can also benefit from the hinterland housing project.

As it relates to issues under the purview of the Regional Democratic Council, Minister Ferguson reprimanded the Opposition-run RDC, for not making the necessary representation, in ensuring these “low hanging fruits” are addressed, to make the lives of the residents easier.

“These people who you have voted for, have to come in and find out what is happening, so they can go back and make representation at the regional level, but they are not doing that,” she related to the residents.

This is a mechanism used, she said, to make the government look ineffective, when the issues are actually under their remit to ensure it is done, since the government would have already played its role in providing the funding through the budget, for these projects.